A little while back I talked about other aspects of The Crew such as exploration. You all are well aware about the cities in the game and how they compare to their real life counterparts, but what about other parts of the map?

After all, it is a very large map and surely there are lots of things to see and explore. Last time I had talked about the many different landmarks scattered about the map that encourages exploration. There are landmarks in the city as well as the countryside and towns in the game.

I started my exploration in the far eastern part of the map which is the East Coast of the United States. I visited landmarks in places such as Cape Cod, Salem, and Cape Canaveral (Yes I know it’s in Florida).

Well now it’s time for the second part of my Exploring The Crew series. I’ll be continuing finding the different landmarks on the East Coast.

This particular area is located in Maine in real life and it is an inlet on the coast of Maine. This area, starting back in the 1800s clear through the 20th century, used to have many different military installations.

Today it is mainly used as a deep sea fishing port for boats and ships that do that sort of thing. The city of Portland utilizes this area quite well.

In the game when you head to the area to add it to the list of landmarks visited, it mainly showcases some rocky areas along its coast and a neat looking lighthouse. Other then that, there’s really not much to it. It’s a neat area to see and then move on. I’ve never been to this area in real life though.

This area in real life is part of the state of Rhode Island and it is a seaside resort today. It is also home to the United States Naval War College and there are a lot of decommissioned ships housed in this particular area. 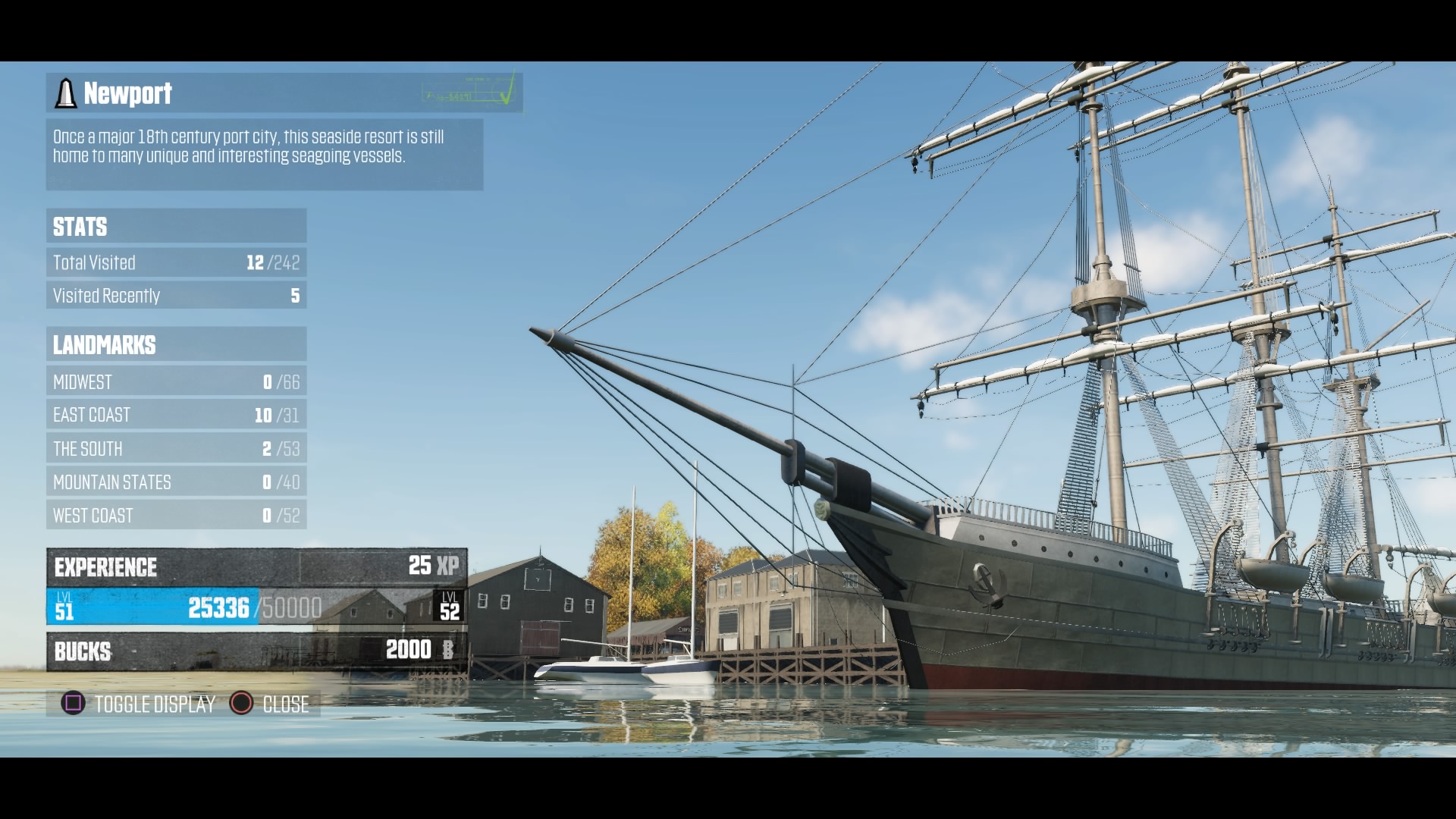 There are also lots of very old and vintage colonial style homes and mansions that are preserved historical landmarks.

Now when you come to this area in the game and engage the short cinematic, you’ll see some old sea ships as well as architecture that Newport is known for. There’s a lot of history here and so it is really neat that the developers included this former port city in the game.

This town is not very big and it’s located in Massachusetts. Its population isn’t even above 2,000, however it does function as a resort area so that does help the economy of the town and surrounding area.

According to the game, Stockbridge was settled in the 1700s by a group of missionaries. Other sources have also said that a mission was established there for an Indian tribe known to be in that area at the time.

The area is also home to a number of museums as well as a prominent psychiatric treatment center. When you engage the cinematic, it shows some of the architecture of the town and some of what the area is famous for, similar to other landmarks in the game.

This area is not a town or resort like the ones mentioned above have been. It is a mountain range that resides mostly in New Hampshire with a small section of it going into Maine.

It is a really nice area in the game and to get to the landmark, you have to go off road or off the beaten path so to speak. Once you get to the top, you’re treated to very nice views of the landscape in either direction.

In one of the screenshots I took of this area, you can see part of a wooded area chopped down as well as a statue of a large lumberjack which I’m sure represents the industry of this particular area.

This is an interesting landmark in the game because when you come to it, it’s actually inside West Point which is a US Military Academy. I find this interesting considering the name of the landmark is Allegheny Forest.

In real life, there is an Allegheny National Forest but it is in the northwestern part of Pennsylvania and West Point is in the state of New York.

Not sure if the developers did this intentionally considering they had to create a smaller version of the US and they just kind of wanted to mix the two. 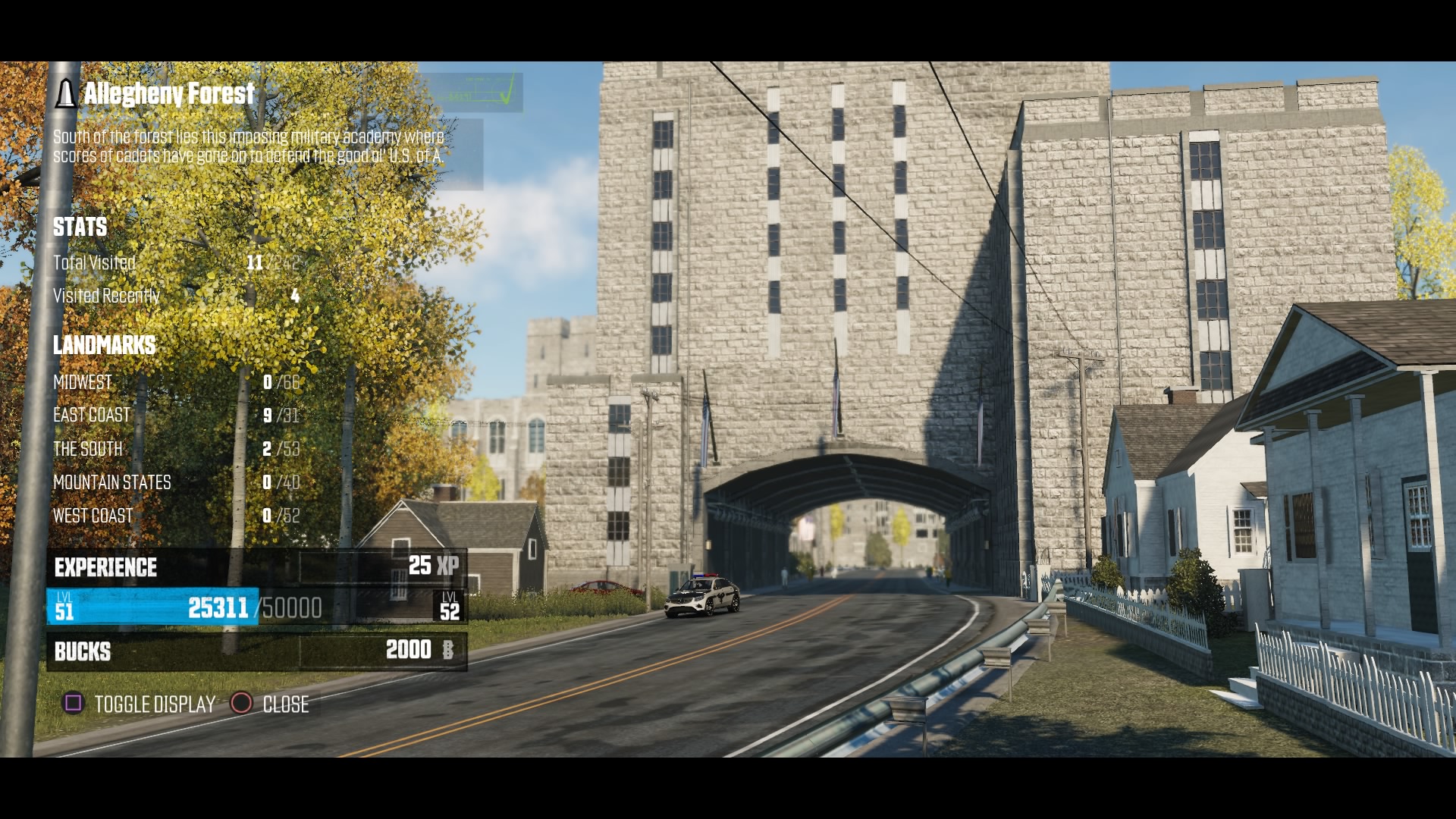 When the short video of the landmark is engaged, it shows most of West Point, but does say that it lies at the edge of the Allegheny Forest. I think it’s cool though that they are both in the game and it is definitely worth checking out this particular landmark.

I still have more landmarks to find on the East Coast, but I’m nearing the point where the biggest chunk of them will be found in New York City as well as the Washington DC area which is fine as I haven’t fully explored those cities.

It has been fun finding some of the landmarks so far in the northeast section of the map because in a way it’s like you’re learning about these places that actually exist and just a little bit about their history.

Once I’m done finding all the landmarks in the eastern section of the map, I will head down south and find all the landmark locations down in that section. I know there’s a number of them in Florida, especially in the Miami area and there’s definitely some in and around New Orleans so you’ll definitely want to check back to see more of my exploration of The Crew and how long it takes me to make it to all of the landmarks.

2 thoughts on “Exploring The Crew Part 2”