Grand Theft Auto 5 is one of the most popular and best selling games that has ever been released. It’s not too hard to see why, with an excellent single player mode, a large and detailed as well as life like map, and one of the best online modes out there.

With one of the best single player experiences that has ever graced a GTA game, why play Grand Theft Auto 5 online? I’m going to talk about what makes the online experience of GTA 5 so great and why I continuously play the online portion today. After you read that, you’ll understand why it’s so hard to go back to the single player portion of the game.

This is what has made Grand Theft Auto 5’s online experience such a thrill to play. The game developer, Rockstar, has added so much new content to the game to enhance the online experience that you just can’t get bored of it.

It’s just no wonder that millions upon millions of people still play GTA 5 online today even after 4 years of being released!

Let’s take a look at some of that content, especially the most recent online content that Rockstar has released.

The Smugglers Run update is Rockstar’s newest major content to be released and it features some exciting new game play online.

It’s in a way kind of similar to the update before which was the Gunrunning update which I’ll talk about here shortly.

With Smuggler’s Run, there are special aircraft that you can use to deliver contraband from a smuggling ring. The great thing about this is that you can now purchase hangars in the game to store these aircraft as well as upgrade those hangars to include workshops if you so choose.

I haven’t been able to participate in any of those things at this time as I spent nearly all my in game money on the previous update so now I’m trying to build up funds again so I can purchase a hanger and try out Smuggler’s Run.

The costs of the hangars are in the millions of dollars and that is not counting the upgrades that can come with them and include lighting, flooring styles, living quarters, workshop, and more.

The workshop will allow you to upgrade the aircraft you have stored there and you can upgrade things such as weapons and armor. From what I’ve seen, there is some very heavy firepower that be upgraded on the new aircraft that came with the update, but that is a good thing now that there are anti-aircraft weapons that were made available from the previous update.

This is the update that I’ve been focusing on a lot lately. With this update, you can create and become a major arms dealer by selling all kinds of advanced weaponry in the game in order to make some money.

In order to participate in gun running, you have to purchase a bunker which are spread out across the map, but most of them are out in the countryside.

I purchased a bunker and upgraded it extensively with an advanced lab, security, faster research, and even a mobile operations center to conduct specialized missions from. I will tell you though that NONE of it was cheap and it cost me most of the $3-$5 million I had saved up throughout my time of playing the game online. 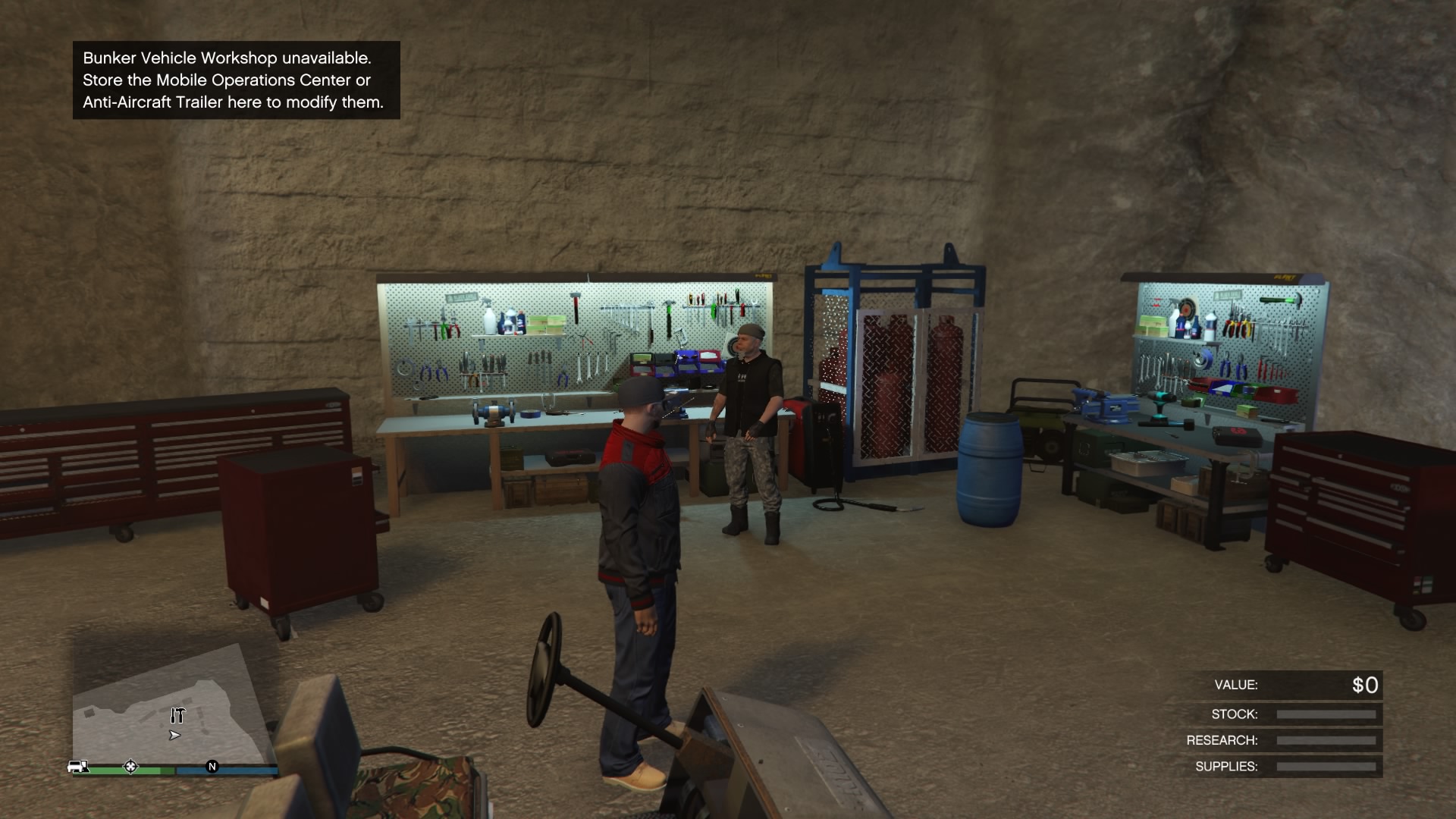 Still though, I’m starting to make back some of that money thanks to the weapons I’ve started selling. Of course you have to have supplies in order to do research and develop the new weapons available from the Gunrunning update and there are missions you can do to get supplies if you don’t want to spend the money to purchase them.

I still have a long ways to go to get access to some of the new weapons and even vehicles that are part of this content, but I will continue to post updates in the future of my gunrunning experiences and progress so stay tuned for that.

Rockstar has released some crazy new racing updates that are just a blast to play. There is the Tiny Racers mode where it has a top down view as kind of a homage to the first 2 GTA games. It’s easy to spin out on these small racing vehicles if you’re not used to them.

There are however power-ups that can enhance your tiny racer such as a speed boost, weapons, and a brief change to other vehicles such as a Knight Rider like car equipped with guns and missiles, a Tron type motorcycle that leaves a neon line behind you and can cause other racers to explode when they touch it, and a vehicle that can cause other races to ramp and loose control.

I haven’t played Tiny Racers a lot as I’ve been more focused on the Gunrunning update that I mentioned above. It is nice to participate in it once in awhile as a change of pace and a way to earn a little bit of money.

Next up is the Cunning Stunts update which brought new types of races to GTA 5 online. Think of it being like Hot Wheels. There are absolutely insane, but fun courses that go WAY up in the air, around and in some cases, through skyscrapers, many jumps, crazy loops, and more.

These types of races are spread out all across the map and use all kinds of different vehicles in some of these races. It’s easy to crash into other players as well as fall off the courses, but fortunately you can respawn very close to where you either crashed/exploded or fell off.

Just like the regular street races, you can place bets and earn money depending on what place you come in.

There are hints that there will be a major update to this that will take a page from the upcoming sequel The Crew 2.

If you’ve read some of my previous articles about Ubisoft’s upcoming sequel of The Crew, then you’ll have seen that I mentioned they are adding new kinds of races to the game that will involve boats and airplanes and you’ll be able to switch back and forth between them with just the push of a button.

I remember seeing online, maybe Facebook, that there was supposedly a leaked video showing something similar coming to the cunning stunts races. If that turns out to be true, I’m sure Rockstar will add their own special twist to it.

This may not seem like a big deal, but in the online world of GTA 5, but you can create your own special character that fits you.

Don’t get me wrong, it’s nice to play as any of the three main characters in the single player portion, but in my opinion it just makes it that much better to create someone who better fits your style.

You can also do all kinds of different customizations to your character once created such as different clothing styles, facial and body features, adding tattoos and even more. 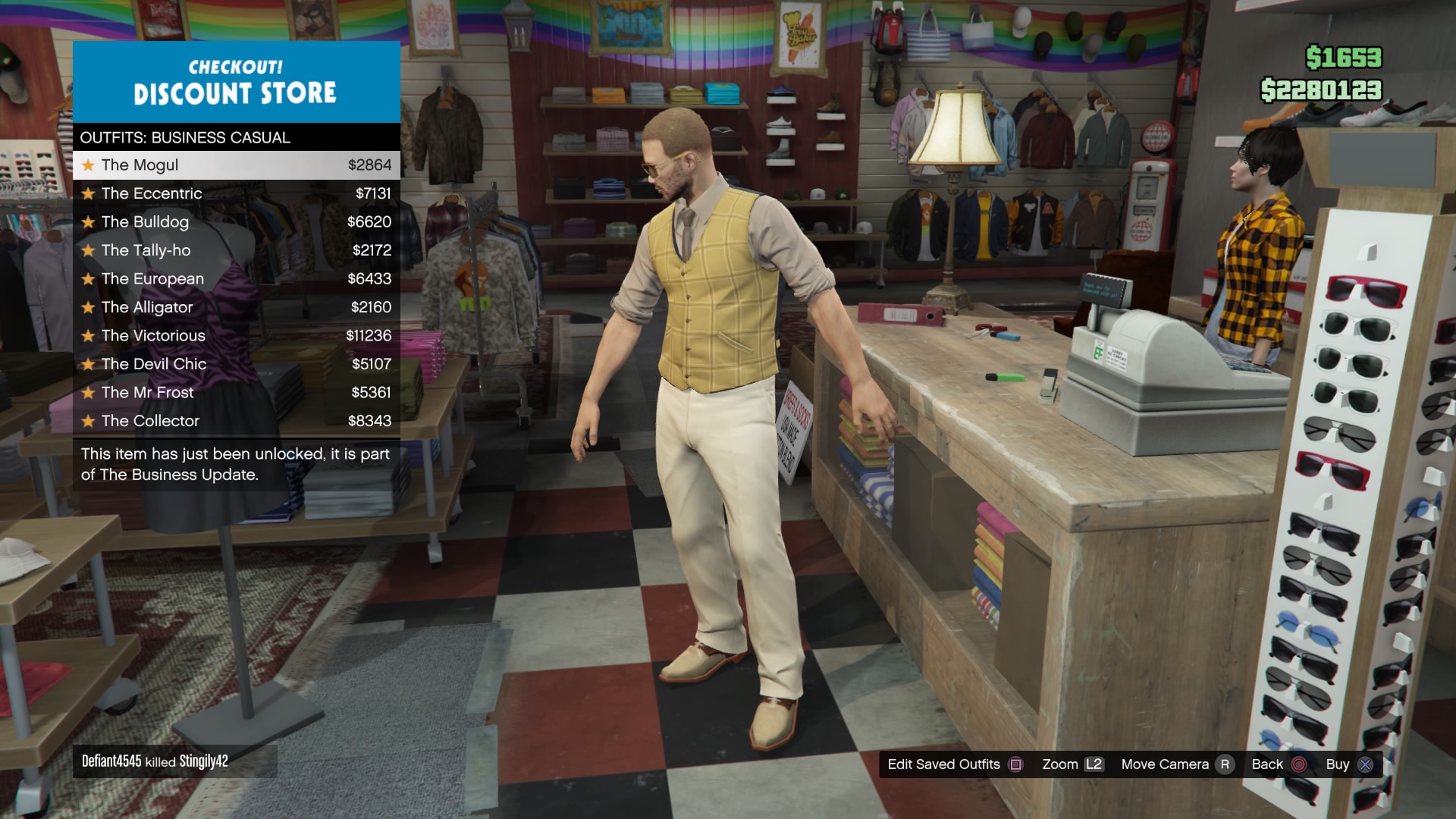 I like the character I’ve created and very similar to RPG games, you can level up. My specific character is a little bit above 170, but that does not mean I’m a badass so to speak as I still can get killed easily at times by other players, but it is nice to have a lot of your stats all the way to the max.

There’s something I do have to mention though. You don’t want to get caught by Rockstar cheating, modding, or have lots of complaints against you from other players as that can either get you banned or your character can be deleted causing you to start all over again.

Now when I say system exclusives here, what I actually mean is that the new content that is released is only exclusively for the current generation of game systems.

If you have GTA 5 on the PS3 or Xbox 360, you will not be able to get the content that I talked about above.

You must have a PS4, Xbox One, or a PC in order to get access to the downloadable content. I can certainly understand why Rockstar did this especially now that most game developers and the system makers have turned their focus and support to the game systems that are currently out and have the better hardware especially with the 4K versions of the PS4 out now or coming soon for the Xbox.

So if you’ve been contemplating buying a copy of GTA V for the PS3 or 360 for you or maybe as a gift someone else and want to play online, I would highly suggest you get them a current and up to date game system so they can enjoy Rockstar’s nearly weekly release of online content.

A few things I forgot to mention that you can do in the online portion is that you can create a club or a crew of other players if you so choose. I’m currently in one called the GTA Demons or GTAD for short. It’s nice to have another group of players with you to participate in the many online missions with and to engage other players or crews as well. You’ll also be able to rank up in the crew you’re in too.

Discounts and Double The Money

Rockstar a lot of times will also do specials one week where they will double the RP and money you can earn for certain things that you can participate in. They will offer special discounts on items that you can purchase in the game.

For example, I remember about a year or so ago that one week Rockstar let you earn double the money from the survival challenges and I took advantage of that and was able to accumulate money fairly quickly at the time.

There also have been discounts and sales on certain vehicles, weapons, clothing, buildings such as garages, apartments and more.

You’ll definitely want to keep any eye out for when these do happen as there may be something you’ve been wanting to purchase for quite awhile, but didn’t quite have the funds for.

Have You Purchased GTA 5?

I haven’t even really scratched the surface of all the things you can do online in GTA 5. There are free roam challenges, other special game modes, criminal organizations you can build, speed challenges and just so much more. It’s fun to discover these things for yourself as well.

As you can see from what I talked about above, there are many great reasons to play Grand Theft Auto 5 online. Rockstar promises that there will be much more content to come and you just don’t want to miss out on those.

If you are one of the very few who have not picked up a copy of GTA 5, what are you waiting for? This has been the best selling game in the history of the game developer as well as the publisher which is Take Two and it continues to sell very well and bring in lots of revenue for them.

Amazon has it on sale right now so you should take advantage of it before the price goes back up. I’ve been playing GTA 5 online as well as The Crew more than any of the other open world games that I have right now and GTA 5 just offers so much more.

You’ll definitely want to check back for more updates as they will definitely be coming when Rockstar releases more content. Don’t forget to share your thoughts below and talk about your experiences playing Grand Theft Auto 5 online.