Welcome back and I’m here with my continuing adventures of my first play through of Uncharted 4. I am now on my 7th part of Uncharted 4. This one is a little more action packed and I definitely have multiple deaths in this go round.

If you remember from Uncharted 4 Part 6, Nathan, Sam, and Sully manage to steal one of Avery’s (the pirate) crucifixes that was up for auction in Italy. It was then that we were introduced to a new character as well as an old one who turn out to be the enemies of our trio.

After escaping and breaking the crucifix open to find the next clue to the treasure, it is determined that the next place to go is in Scotland to a cemetery near a church where Rafe (saw his character earlier in the game during flashback to Nathan and Sam’s younger days) is currently searching. Fortunately he’s searching at the church and not the cemetery, or is he?

I begin where I left off in Scotland looking out into the landscape towards where I need to go.  As Nathan and Sam make their way down the beautiful landscape, you can hear loud booms in the distance. Rafe is actively searching in the nearby church for Avery’s grave or next clue.

There is some concern with Rafe and his goons as well as Nadine being nearby that they could also run into trouble. Sam and Nathan make their way to a ravine and I immediately begin looking for a safe way down.

I get to the edge of a cliff and look around. I drop down thinking I’m going to grab the ledge and hang on to see if there are any other climbable areas, but of course I don’t grab onto the ledge and end up falling to my death. As I mentioned earlier, I do have multiple deaths this go round.

I’m now trying to figure out a way to get over to a specific area. I have to cross over a slope that I can easily slide down on and towards my death. Well I decide to hang from one ledge and jump to the edge of the slope and try and grab that. Needless to say it doesn’t work and I fall to my death again. 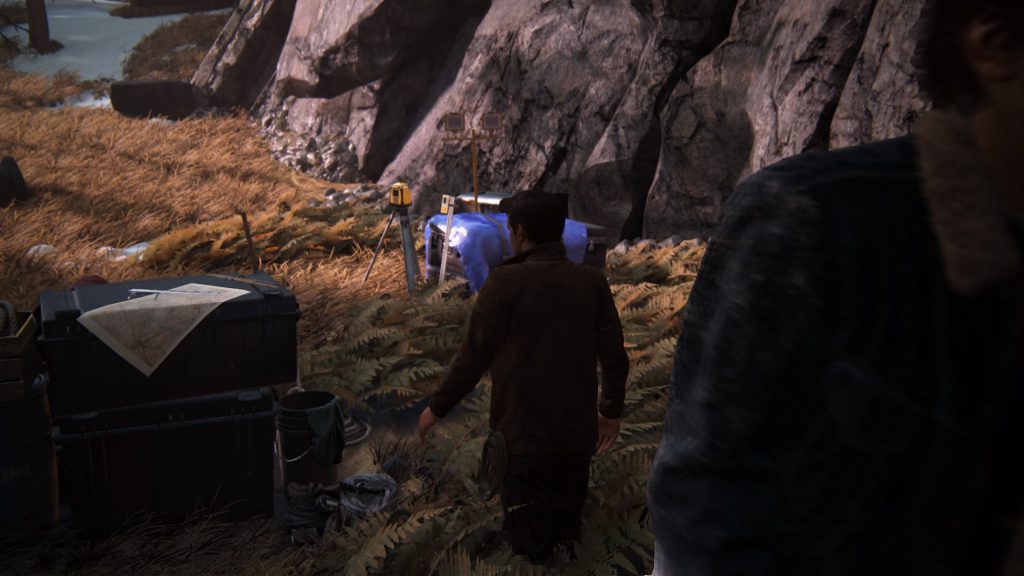 Alright, I’m determined to get pass this now!! After respawning I make my back to the same area as does Sam, but then he says “Nathan, this way”. I look up and see him jump on that dangerous slope and he’s sliding diagonally to the other side instead of sliding down and over the edge. Why didn’t I think of that?!

I follow his lead and make it across without dying thankfully. We continue on and look down to an area where we have to go next as we can see containers and a tarp. I look for a way to get down there safely and I come across what’s left of a tree at the edge of a cliff and notice some rope on it. Nathan mentions that it should hold and I press the L1 button and hook a rope onto it and begin to propel down.

As we make it to the crates, equipment, and other stuff, Nathan asks what all that is and Sam says it is excavation equipment. Nathan recognizes the company name on one of the barrels which is called Shoreline. He’s a little baffled as he thought they were all over by the Cathedral.

Right after Nathan mentions that, gunfire erupts immediately and we have to take cover. I have a gun fortunately and I fire back, but I’m getting pummeled hard. I still manage to kill one of the people/henchmen working for Rafe and Nadine.

All of a sudden I hear the unmistakable sound of a grenade being thrown and a timer rapidly speeding up from it. The grenade lands right next to me and I have to quickly climb over the crate I was using for cover and head towards another while I’m getting shot at.

Fortunately with the help of Sam, the other two gunmen shooting at us have been killed. I quickly restock on ammo from the dead henchmen. Now that Nathan and Sam know Shoreline is in the area, they realize they need to get to that grave site quickly.

As we are walking and making our way there, Sam and Nathan make some small talk about how Rafe and Nadine are starting to search in this area. We make our way down further a little bit and come across some ruins that were possibly living quarters for the monks from the cathedral.

Nathan makes his way around a lot of shoreline equipment, but comes across a small box on top of one of the crates. He opens it up and sees that it is dynamite. Sam tells him to be careful with it. I take a stick and throw it at the door from the ruins, blowing it up so that we can move on.

We head in and see that there’s a way up through the roof, but it is high and out of our reach. I must go find something that we can climb on to reach it.

I go back down to where all the crates and other stuff are to see if I can find something to drag into that living quarter so that we can climb through the roof. I eventually make my up some stairs and find a large yellow box I can drag, but there is no way I can get it down where I need to go. There’s a door nearby where I can through some dynamite and blow it open which is what I do. I can finally drag it to where I need to go. 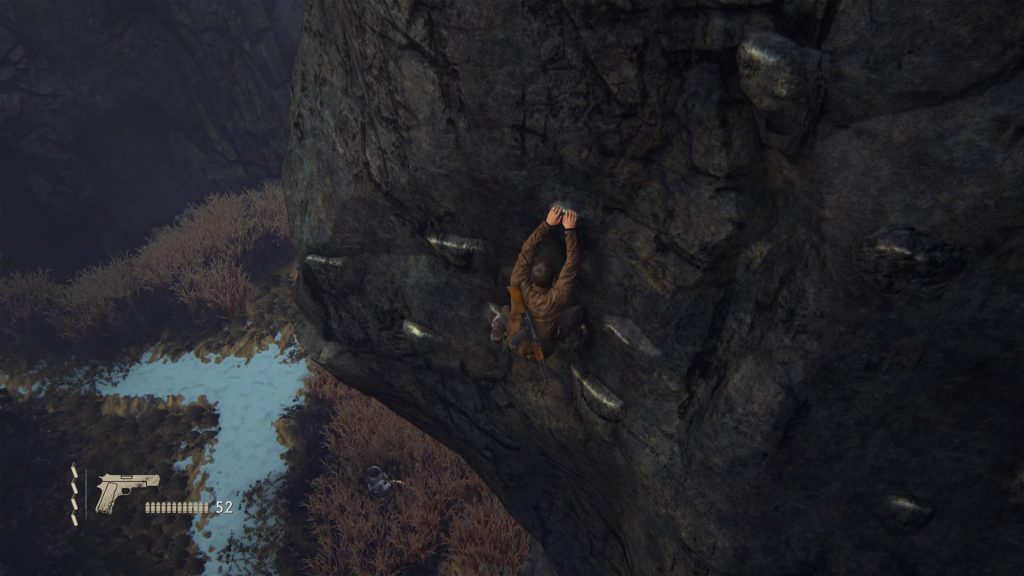 As I’m pushing it along, Sam notices more Shoreline gunmen arrive and motions for Nathan to hide. I immediately let go of the large yellow box and take cover behind a wall. I can hear the gunmen talking amongst each other about shooting to kill.

One of the gunmen spots me from above and starts shooting at me and a gunfight erupts. I manage to kill the one from above and I see an AK-47 that he’s dropped. I go to pick it up, but another gunmen arrives and proceeds to knock me out. He grabs me and I repeatedly press the triangle button to get out of and Sam arrives to kill him. My screen is turning black and white because my health is rapidly deteriorating.

Another gunmen suddenly arrives and starts hitting me. Two more show up and I get killed. This is a really tough area! The difficulty setting I have it set on is moderate which is the middle of the pack and what the game automatically starts you at unless of course you decide to change it. I can’t imagine what it’s like at the harder settings.

I respawn and go back to where I was before and take cover. I spot an armed Shoreline guy and immediately take him out. More gunfire suddenly erupts, but I still take cover. I take out another one and decide to move. I am getting hit multiple times, but head to an area where a gunmen is on a ledge. I jump and grab onto the ledge and try to grab the gunmen to throw him off, but I am killed yet again. I’m getting sick of getting killed!

When I respawn this time, I go and hide behind the yellow box, take a stick of dynamite and throw it towards a few of the gunmen. Some of their bodies go flying in the air from the large explosion! After this happens, a major firefight erupts that lasts for minutes. After dodging grenades, taking cover, killing more gunmen, and nearly dying, Sam and Nathan manage to kill all the gunmen in the area.

I make my way back to the large yellow box and push it to where I need to go. After getting it into the right spot, I climb through the hole in the roof and look around. I spot a large tree branch off the side of a cliff and see that is where I can throw a rope on and swing.

I swing around to an area of a large cliff wall that I can grab onto and climb. As I climb higher and make some jumps, there’s another tree branch sticking out of the rock wall. I use to swing around, land on a flat area, see yet another bigger tree branch, swing on that to a higher section of rock wall and land on a ledge. There’s part of a ladder directly above me and Sam swings over to where I boost him up to the ladder. 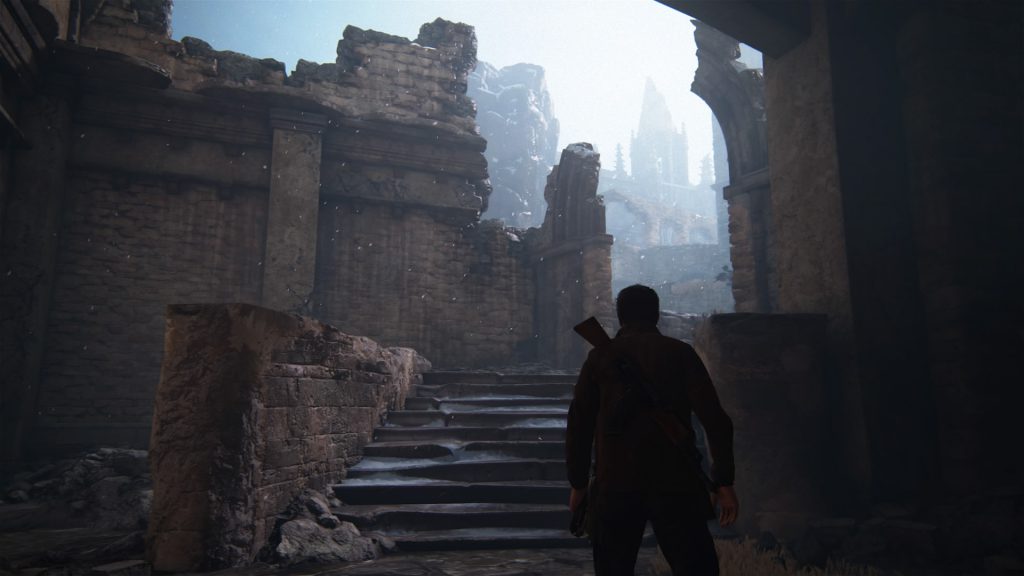 He comes around the other side and I jump and grab his hand and he pulls me up. We walk around and see where we need to go. We’re not too terribly far away and keep on moving. After sliding down and then jumping and grabbing onto a cliff wall, more gunmen arrive below me. One of them decides to take a leak in the grass directly below Nathan.

Once he’s done and starts to move on, I climb down low enough to where I can jump down to the ground and hide in the tall grass. This makes me happy as I can be stealthy and sneak up on some of the gunmen and kill them quietly.

I make my way to another area of ruins with more gunmen. I kill a few more while being sneaky, but there are a lot more of them and I know a firefight is coming. Once it starts, it gets crazy real fast and I do end up getting killed.

This time when I return from the dead, I take cover and throw some dynamite, killing a good number of the gunmen. The gunfight lasts for a few minutes, but Nathan and Sam are successful in killing all of them which also allows me to pick up ammo for my guns.

As we make our way up and towards our destination, we come up to a few more gunmen, but this time I’m able to sneak up on them and kill them without using any weapons. I even kick one off a cliff.

The next part is kind of interesting as we have to slide down some slopes diagonally to get to higher ground by climbing onto some of the ruins. It takes awhile, but we finally do it. I do fall to my death a few times though, but you shouldn’t be surprised by this point.

Sam and I finally make it to our destination and we come up to a door that’s not fully closed. Both Sam and Nathan grab it and push it up and both make it underneath. We are finally here at the cemetery!

This is where Nathan and Sam start to look around and look on the clue from Avery that they got from the crucifix. They have to find a specific grave that has two swords crossed over each other that looks like an X, has a skull below it, and two different dates which are 1659 and 1699. This is where I end Part 7.

Well folks I hope you enjoyed my description of Uncharted 4 Part 7! The video is rather long, but hopefully you enjoyed watching it. I will definitely pick up where I left off as Nathan and Sam are looking for that specific grave with the correct markings. I have a feeling that there will be some interesting surprises as well. Feel free to comment!