I’m back with Uncharted 4 Part 8! Last time I had to deal with falling a few times to my death as well as getting into a few gunfights with the gunmen from Shoreline. After some sliding about and jumps, Nathan and Sam finally make it to the main part of the cemetery to find Henry Avery’s grave. This is where I had ended part 7.

As I begin part 8, I look in the journal so I can identify the correct grave. Sam and Nathan have to find a specific grave that has two swords crossed over each other that looks like an X, has a skull below it, and two different dates which are 1659 and 1699

Both Sam and I go looking around at different areas of the gravesite. I find a few graves that have similar markings, but not necessarily the correct dates. After a few more minutes of searching I manage to find the headstone/grave with the correct markings. It is actually one of Avery’s alias’ whose name is Benjamin Bridgemen.

As Nathan and Sam inspect the grave, Nathan notices something unusual about the skull in the headstone. He says it seems like it actually doesn’t belong to the stone. Both Nathan and Same realize the skull should be facing sideways and not face forward.

Nathan grabs the skull and turns it to the side causing the ground behind the grave to descend into a set of stairs and head underground. I jump down into the new area and descend down another set of stairs.

After coming into an open area, Nathan realizes that it is a crypt. Sam believes this is probably where all the treasure is hidden. Nathan says they can only hope so. With a flashlight in hand, Nathan goes to a corner of the crypt and finds a note on the ground.

The note appears to be written by the monks who were in charge of up keeping the cathedral, cemetery and crypt. The note from the monks talk about how a stranger came into their midst as they were doing morning prayer. This stranger (who was Henry Avery) talks about a battle at sea and about how some of his crewmen were killed and that he would like to bury them. 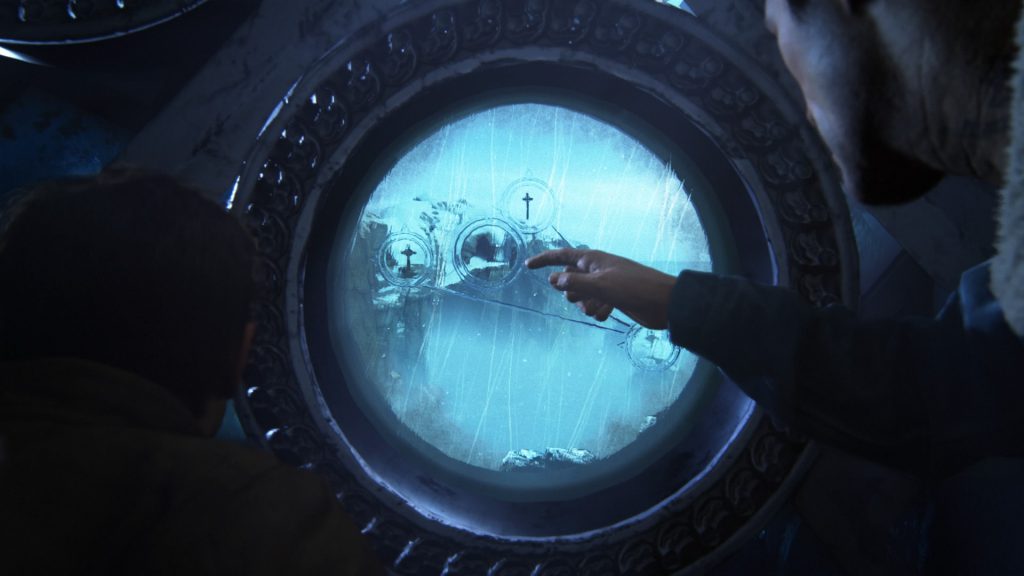 The monks then told them of how they had pretty much run out of money and everything was falling into disrepair. Henry then got out a satchel of gold coins the likes of which they had never seen before. He offered them gold in exchange for the land and everything on the land. The monks graciously accepted and with the gold, they moved on elsewhere.

After reading that and searching around a bit more, we go down some more stairs and come to an area that shows three different crucifixes. One is definitely Jesus in the middle while the other two are thieves. Nathan starts to look around some more and finds another area directly behind the crucifixes. He comes up behind the one of Jesus and  notices there is like a candle of some sort.

He asks Sam to come over there with his lighter. He lights it and the fire rapidly spreads to the other crucifixes and they immediately light up with fire inside the grate which also shows light to an area behind them that is a special kind of door.

There also appears to be light emanating from the other side of the door as well. Nathan heads back to the main side of the 3 crosses and notices something different as something has opened up on the base of each of the crucifixes. He can look in through them at the door and see lights that need to be lined up at certain points of the door. This means it is a puzzle to advance to the next part.

The puzzle isn’t that difficult and they’re pretty easy to line up. I have to tell you though in part 9, I come across a much more difficult puzzle (for me anywhere, I’m not always good at figuring them out in games) and it takes me nearly 19 minutes to figure out.

Nathan and Sam make mention that the way the light is shown on the door, it is in the shape of a constellation known as Leva, the scales of justice. Nathan goes over to the left side of the door and turns a handle to open it. The door opens to reveal a contraption like window that looks out to a certain area. Sam is a little disappointed that there is no treasure.

Nathan notices 3 crosses when he looks out the bottom part of that circular window. There is a cave opening right below those crosses and Nathan makes mention of where he believes Avery is pointing where to go next.

Now this video of Uncharted 4 Part 8 is quite long. It is just 2 minutes shy of a full hour. I won’t go on and on of every little detail about the rest of it so I will try to summarize as best I can.

Nathan and Sam realize they have to get back out of the crypt, but have to head towards the Cathedral and inevitably Shoreline and Rafe. Things are going to get crazy from here on out. As Sam and Nathan head out of the crypt Nathan immediately notices in the distance gunmen in front of a large door/gate. That is where they need to go next.

I’m able to get some dynamite before taking cover to try and hide from the gunmen. I’m not going to go into a lot of detail here, but I will say that it involves a lot of hiding in tall grass and stealth kills. There is some gunfights too and I will get killed.

After finally getting to that gate and getting it open so that we can get through and move on, we come to areas where we have to slide down, jump, grab onto ledges and you know the rest by now. It does get interesting as we have to go through some cave like areas, lots of jumps and swinging on ropes and even coming across interesting contraptions and even what is left of a pirate ship. Of course it wouldn’t be complete without more gunmen from Shoreline. 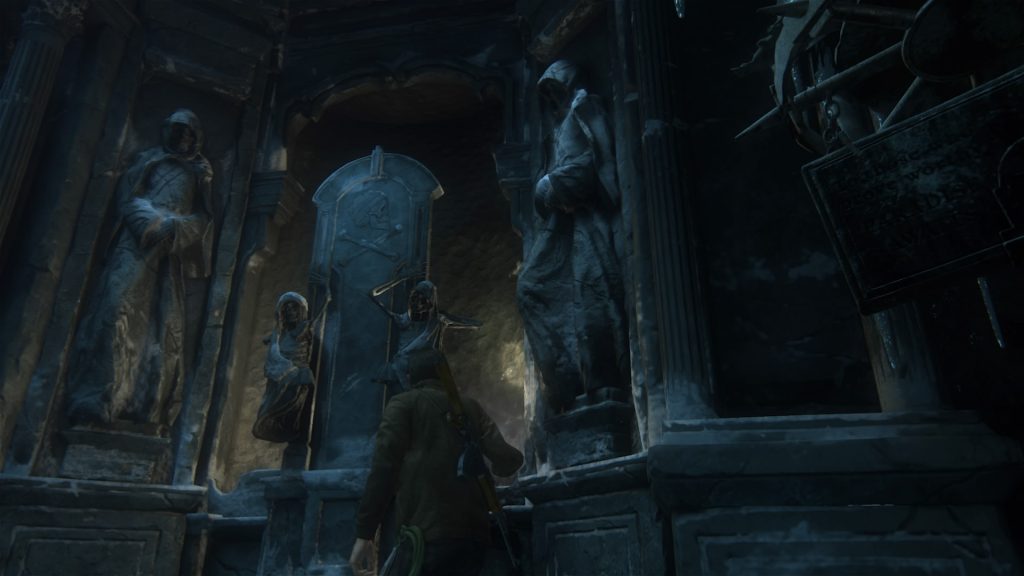 After killing and making our way past the gunmen, climbing some massive cliff and walls and swinging our way around, we finally come up to the entrance to the cave that we saw back in the crypt. Nathan and Sam enter the cave and make their way around and down some stairs, and they both come across a door that has an open hole to the right of it.

Nathan makes mention that he probably has to put his arm in there to see if he can find a lever to pull and open the door. He is worried though it could also be part of a trap and he could lose his arm. Sam tells him to just pull the lever to open the door. Nathan does, and nothing happens to his arm. The door rolls away to the side and a brand new area awaits them.

Nathan notices some writing and it basically says that those who are worthy will receive paradise while those who prove unworthy will await their grim fate. That certainly doesn’t sound good. Sam and Nathan both notice though that the warning wasn’t written by Avery, but instead from another pirate.

Well folks this is where I end part 8 and part 9 will begin soon. Hopefully you enjoyed reading a bit about what happened in Uncharted 4 Part 8. Things are certainly getting interesting now as I’m exploring a cool area constructed by pirates long ago.

Also as I mentioned earlier, the video is quite long at just about an hour long. I don’t blame you if you don’t want to watch the whole thing or skip parts of it. I can tell you that part 9 is even longer, but it will be worth watching as it does get intense (though there is a 19 minute section you can definitely skip).