I’m back for another round of my Doomsday Heist experience. Last time I talked about how I had to have other players with me in order to complete the new round of missions in the Doomsday Heist. I had to get inside a coroners office and download data off of a computer while another player had to steal an attack helicopter and protect us as we made our escape.

That mission was mostly successful and we had to restart only one time. Well now I’ve moved onto the next mission and this time I have a total of 4 players that includes myself. It only makes sense because I first started the prep missions, I had to steal 4 Deluxos.

Now it’s time to see what the Deluxo can do in The Doomsday Heist as I got to pretty much all its unique features for this mission. I will include a video at the end of this latest adventure, but I can tell you right now it is a bit long mainly because things don’t completely go according to plan during this mission which proves a bit trickier than I thought.

The first order of business is for all of us to go and pick up the Deluxos. We all have separate vehicle so we end up taking different routes to Deluxo pick up point. Surprisingly, I have to set the GPS there as the mission does not automatically have one already routed as is normally the case for missions.

The vehicle I end up taking is my Corquette (which is of course a knockoff of the Corvette). I really love how that car looks and the speed it provides is pretty good. The destination I have to reach is a little over 3 miles away in the city of Los Santos.

Once I arrive as well as one of the other players, we have to wait until the others arrive so that we can all get into one of the Deluxos that I had stolen from an earlier prep mission.

Once all players are in a Deluxo, we are told by Lester that there are 4 trucks that each of need to get close to in order to begin hacking this very important data. The trucks are scattered across the map in Los Santos and each of them are marked by a letter on the map as well.

As the other players choose their targets, I end up choosing mine and start driving towards it. I end up going after the one marked by the letter D. After I mark my route to the truck, I end up catching up to the armored truck but a guard begins firing a gun at me from the back of the truck.

I have to get beside it so that I can open the SecuroServe app on the smartphone in the game and the hack can begin. It is a little challenging but I end up staying beside the armored truck while taking very little gunfire. The hack is completed and so then I have to destroy the truck. 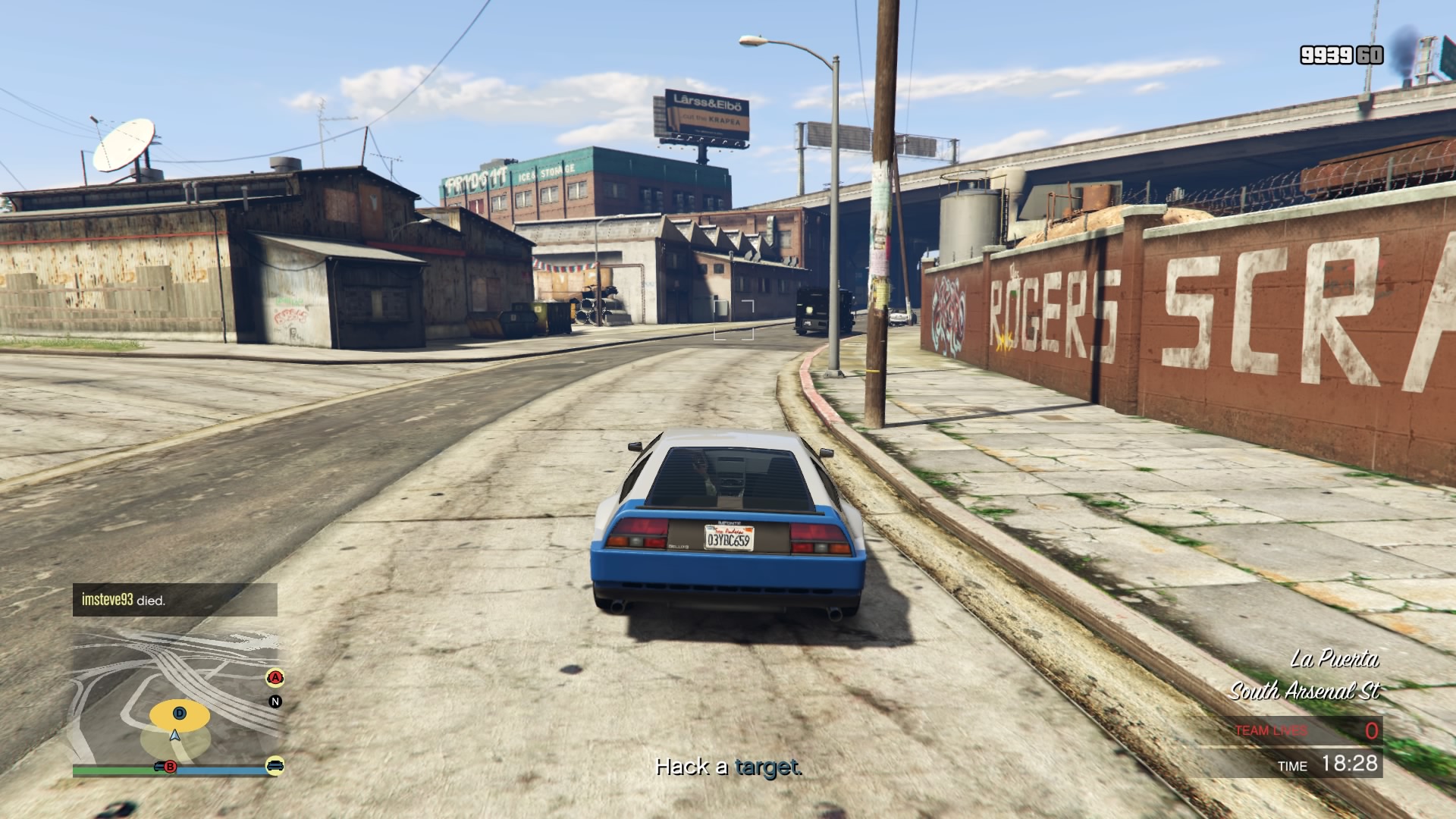 Destroying the truck actually turns out to be pretty easy because the Deluxo is equipped with missiles and machine guns. All I have to do is target the truck or at least make sure it is in the middle of my rectacle and BOOOM, the truck is destroyed.

After that is done, Lester informs that the next place that I have to go to for a data hack is on the water. I quickly bring up my map and see that there are two areas near the docks, both marked by letters that I need to go to. I end up choosing C since it is the one closest to me.

Once I leave the airport and get to the docks, I engage the hover mode on the Deluxo where the wheels turn outward and I’m able to hover just above the water. I see my target as it is moving in away in a boat and just as I begin to catch up to him, the mission suddenly stops and a big message comes up saying that the mission has failed because one of the other Deluxos got destroyed.

I will have to say that I was not expecting anyone to get killed that quickly. Fortunately we all decided to restart, but I was afraid we’d have to start back from the very beginning. Thankfully, that was not the case in we started at the beginning of the second stage of the mission where we had to go into the water for our next hacking target.

Once again, I head back to the same area I chose before. It doesn’t take me long to get back over by the docks, but just as soon as I get there, the mission failure screen pops up yet again as someone had one of their Deluxos get destroyed. Grrrrr….this is really starting to get annoying. We have to restart yet again.

Ok, here’s to hoping that 3rd time’s the charm. I get into a Deluxo and head back to the same docks and I’m actually able to get into the water this time and go after the boat. I finally catch up to it and begin my hack, but unfortunately, I am fired upon and quickly killed thus causing the mission to fail again. I’m definitely the one to blame this time. I have to give it to the other players for not wanting to give up and keep on trying.

Now we are on our fourth try and I head back to the same area as before. I’m able to get up to that boat, but this time I try to get just a little in front of it. Even though I am still taking gunfire, I’m not taking it directly and I’m swerving a bit to try to get hit directly which leads to success for me in getting the data that is needed from the hack. I then get the go ahead from Lester to destroy the boat which I’m very happy to do especially since it is revenge from killing me earlier.

I’m also happy to report that all the other players are successful this time in completing their hacks and then Lester mentions that we are nearly done and that the final target is at Los Santos Airport. Let me tell you, the final hack is definitely an interesting one.

After I’ve made my way to the airport, I have to wait for the other players in my to arrive. It kind of is a long wait as the 4th player appeared to be on the other side of Los Santos.

Lester quickly announces that the signal is coming from a plane that is starting to take off and that we need to hurry. This is not a small plane and it appears to be a pretty large Russian plane. I say Russian because I’ll soon see that the Russian Flag emblem is on the back of the plane.

I quickly drive onto the runway as well as the other players, but the plane starts to take off. Lester then informs us that the Deluxos can also fly and that one of us needs to get close enough to the plane in order to get that sensitive data. Let me tell you, it’s not an easy feat keeping up with the plane especially when it takes off as you have to pull up hard in the Deluxo to stay with it.

Staying up with the plane is still challenging especially when it makes a sharp turn, but I manage to do it. Unfortunately, things start to turn as company arrives to challenge us via attack helicopters. We all immediately start taking gun fire as three helicopters move in. I start to hang back a little so I can start targeting the helicopters and take them out. 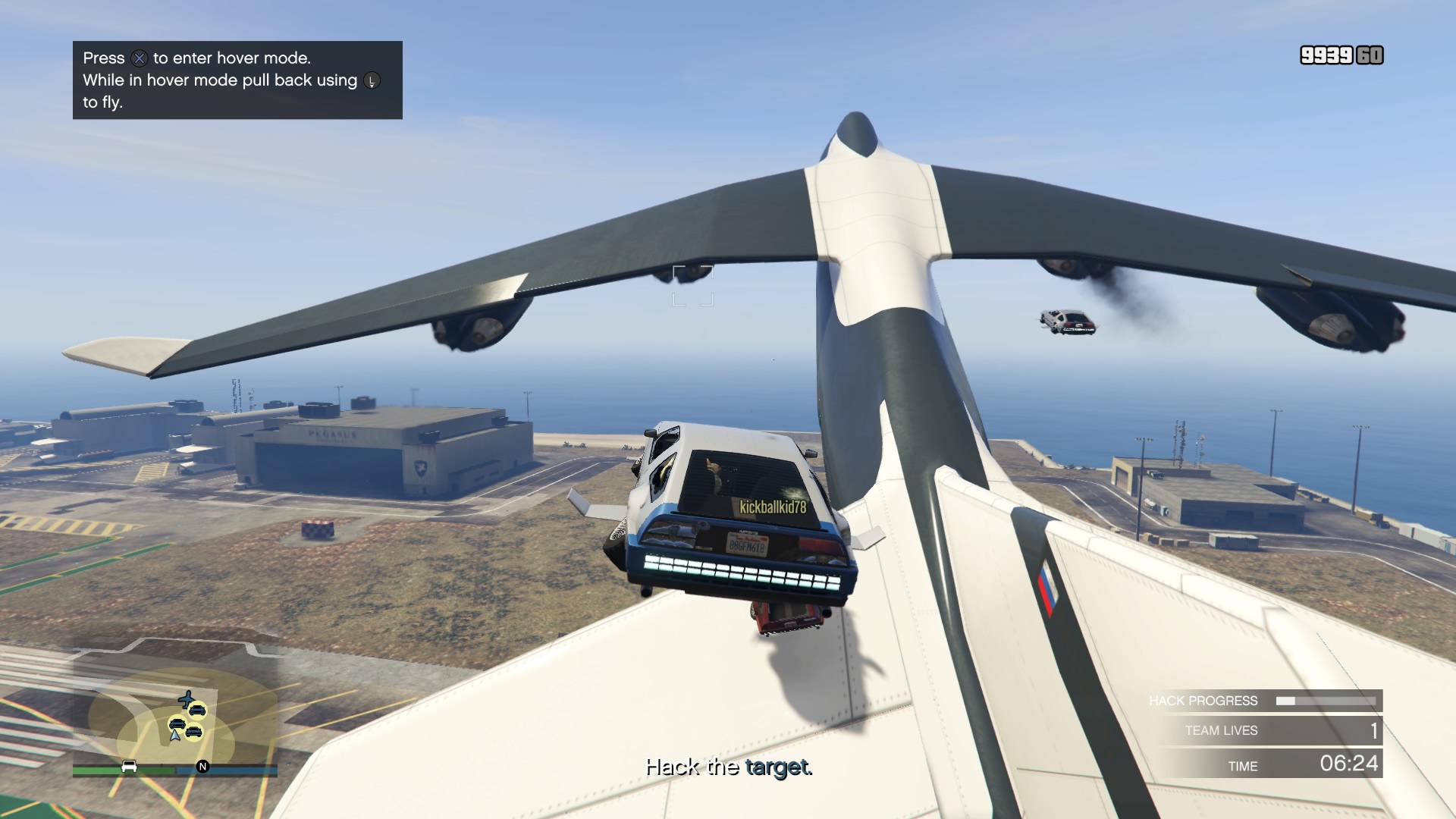 I manage to target one quickly to my left and blow it out of the sky with a missile from the Deluxo. Did I mention how I love that the Deluxo’s are armed? I immediately target another one and end up destroying that one as well. More helicopters are coming in, but I quickly blast another one to smithereens. There’s one helicopter left, but sadly something goes horribly wrong. It appears that a player inadvertently fired a missile at the plane and ended up destroying it, causing us to the fail the mission. This is starting to get old!

We have to restart yet again, but fortunately it starts us back at the airport and so we have to head back to the runway and begin our ascent towards the plane so we can hack the data. Not long after we get up in the air though, the plane is destroyed yet again as there is an explosion and one its wings falls off!

I’m sure you know by now that we have to restart. Things proceed a little differently this time as I’m now the one that initiates the hack and the other 3 players stay behind just a bit which is a good thing because when the helicopters arrive, they are able to start taking them out. The hack is fully successful and now we can actually blow the plane to pieces as well as the other helicopters that arrive. We all meet back at a specific spot which happens to be on top of a parking garage in downtown Los Santos and Lester tells us “Job well done”.

Thank goodness that entire mission is finally completed! What a doozey that was! The numerous restarts that happened as well as the hacks getting more difficult. Now that this first setup mission is out of the way, it is time for next one. I’ve already completed them and will talk about them pretty soon.

I do have to say though that this mission is just a small preview of what’s to come because I will have A LOT more mission restarts thanks to a different group of players that join me in trying to complete these missions.

The missions also get more difficult as I’m in more confined areas and there’s a lot more firepower with the enemies that we have to fight against in these setup missions. Stay tuned because it’s going to get even crazier in the Doomsday Heist! In the meantime, there is a video posted below of my entire adventure that I just described above if you prefer to watch the action.