Not long ago, I talked about my goal to reach $10 million dollars in GTA 5 which you can read more about. I mainly talk about the reasons why I want to reach that amount of money in the game and what I intend to do with it when I reach that amount.

I’m halfway there with a little over $5 million and I’ve been doing a lot of my favorite jobs or missions which is the Survival Missions. I’ve talked a lot about that too as my favorite ones are the El Burro Heights Survival and the Sandy Shores Survival.

I know it may not seem like a lot, but do enough of those and it does add up faster than you might think. I also from time to time try other things like the stunt races or the free mode challenges and earn money that way as well. 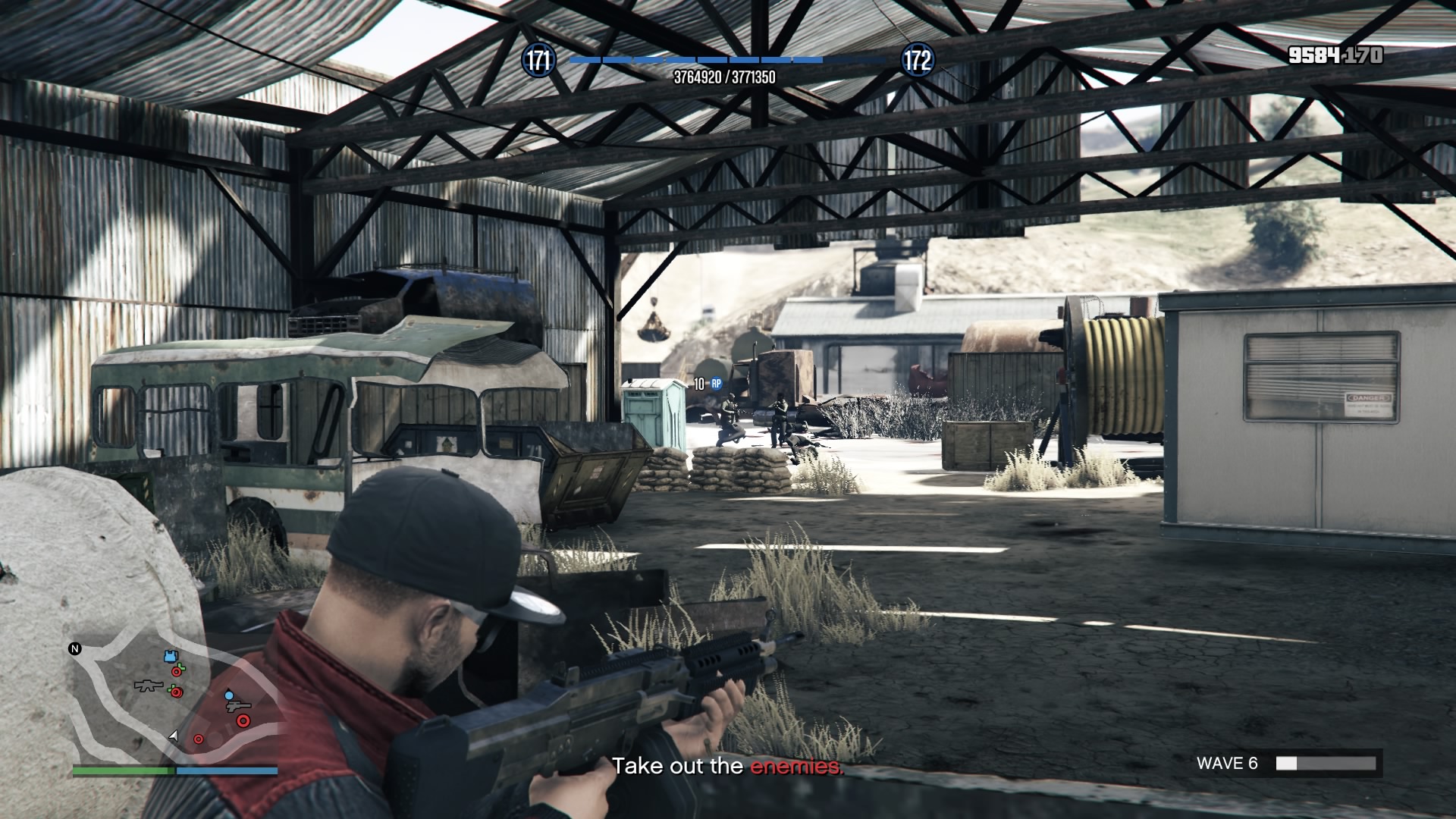 I do need to finish up the Heist missions online though as I haven’t gotten all the through them yet and I know that a lot of money can be earned that way as well.

Well now that you know what I’m planning on doing in my latest go rounds in GTA 5, I will talk about my latest venture on getting that much money in the game. Here is my venture to try and eventually reach that goal.

Now as I mentioned earlier, the best way for me to earn money is doing the Survival challenges and so I go to the El Burro Heights Survival challenge. This time when I try it, I successfully get past all 10 rounds and earn $30,000.

It was challenging though and I did get killed in a couple of the later rounds, but thankfully the other players that were in the challenge were able to step up and complete the rounds in my absence.  Rounds 7 through 10 are especially tough since the Merryweather troops sport much heavier weaponry than the earlier rounds.

In rounds number 7 and 10, helicopters come around with Merryweather guards shooting from those helicopters. The more players there are in the game (up to 4), the larger the number of helicopters that appear in those rounds though no more than 3 at one time will appear.

Once I successfully complete the El Burro Heights challenge, I decide to play the Sandy Shores challenge which can be quite tough as well in the later rounds.

I know some of the spawn points of the enemies in this particular challenge so I place sticky bombs in one of those spots just before each round begins and when the challengers spawn in that particular spot, I press the right button on the directional control pad and BOOOOM goes the enemies.

The only bad thing is that they could spawn there in that same spot later on in the round and I wouldn’t be able to put more sticky bombs there as I’m busy fighting others that appear in other places on the small map.

I managed to get to round 9, but the other players as well as myself ended up getting killed and failing that particular survival challenge. I ended up getting a little over $14,000 for my efforts though. I know that might not seem like much, but any little bit does add up.

There’s also something I read recently about store clerks disappearing after a recent update Rockstar did that doubles your money and RP in certain challenges. It seems players are reporting that there are no store clerks in the different stores and shops around the map since this update and it appears to be across all platforms.

I recently decided to go and see this for myself. I went into a convenience store south of downtown Los Santos, but the clerk was there. I decided to pull out a weapon and rob the place which ironically enough, I had never done online in GTA V. Not really sure why I haven’t up until this point, but I ended up getting around $20,000 for my efforts and I was able to evade the cops.

Since I was actually pretty successful with that robbery in the game, I might try it again in the future as a quick way to earn cash and get closer to my $10 million dollar goal.

I also had a nice surprise today for when I logged into GTA V online, I got a message or alert saying that I had received over $400,000. What it was is that any player who logged into the online portion of the game during I believe the last week of April and before May 1st received that amount of money. That’s definitely a nice gift from Rockstar.

As far as the Stunt Races are concerned, I’ve been doing those as well to earn some money. I haven’t gotten a ton of money from them especially when compared to the Survival Challenges, but a few thousand here and there does help. It is rare for me to win an entire race, but I usually end up placing high enough to earn a couple thousand or more.

I haven’t participated in the Tiny Racers mode yet, but you can bet I will give that a try. The trailer of that mode looks really fun and I like that it is a throw back to the early days of Grand Theft Auto with the top down view.

I’m going to continue to do my bread and butter for earning money which is of course Survival, but I will also branch out into other things such as doing more of the Stunt Races as well as other missions and jobs and participating in the free challenges from time to time especially ones I know that I can do really well at.

Something else I know I can earn a lot of money from, but that I need to finish are the Heist missions as I mentioned earlier. I did just enough of them to where I was able to buy the Hydra jet, but haven’t done any of them since and I really need to get back into that and finish them. I remember when I helped other players finish theirs, I earned quite a bit of money.

As always, check back here as I will go into part 2 of my quest of earning at least $10 million so I can purchase an executive office as well as a vehicle warehouse with the ultimate goal of purchasing that vehicular car ramp.