I know it has actually been awhile since I last talked about the latest updates and things going on in GTA 5. I had been talking about my latest adventures in the world of Gunrunning and the research for some pretty powerful weapons and even vehicles that can be modified.

The thing is though it takes quite awhile to unlock all of those just by doing regular research, stealing supplies so you have enough of those things to get the research completed and then wait even longer to get the item you were hoping to unlock from that research.

Well, I’ve changed things up a bit and now I can proudly say that I’ve unlocked ALL of the weapons and other items and upgrades from the research in a pretty fast time, but I will say that it cost A LOT of in game money as well as some actual real money in order for me to achieve that. I will get into more of that in a future post.

For now though, I want to talk about something that I was able to unlock that I just have a blast using and that has some very unique features. I’m talking about my use of The Oppressor in GTA.

A Motorcycle Unlike Any Other

The Oppressor has the ability to glide or fly for a short period of time because it has wings on the front and back end of the bike that can be extended with the press of a button. It also has a large rocket boost on the rear of the bike.

In the past when I played GTA 5 online, I had always wondered how other players were able to get these motorcycles that suddenly could fly and then I would get blown to smithereens by them. Now I know why.

When you first purchase the bike, which costs over $3 million, it comes standard with a front facing machine gun. You can add missiles to it though, thanks to gunrunning and research done that will allow it to be modified.

Now there is not an unlimited amount of missiles though as there are about 20 of them, but they can either be homing missiles or just regular missiles, your choice.

Because of its unique ability to glide along with its rocket boost and wings, it has allowed me to get away from some pretty tight spaces especially when other players are involved wanting to take you out. Now that you know what the Oppressor is and consists of, here’s a recent experience of mine using this awesome bike.

There is something else that I want to mention about this bike that makes it just that much better from pretty much everything else I own. I’m not sure if this was meant to be a feature on it or not or maybe it could be because of my rank or something else, but I have noticed that whenever my health is low or not at a full bar, whenever I get on the bike, my health will fully regenerate.

Again, I don’t know if it is a feature of the bike or because of something else, but I love the fact that this happens and it definitely ensures that I will be using the Oppressor quite a bit.

The Oppressor in Action

As I start a new session in GTA 5’s online mode, I get a message saying that my motorcycle has been impounded by the police and that I need to come by and pay for it or else it will be destroyed. Not entirely sure why it was impounded considering it should’ve been just outside of my hangar at Fort Zancudo.

I did come from another online session though and it looked like someone took my Oppressor as I saw it flying off so maybe it landed in some other part of the map or the player got into some kind of mishap with the police and they impounded it. Regardless, I had to go and get it before I lost it permanently.

I make my way to the impound, paid the $250 (I have over $10 million thanks to shark cards), and I’m on my way with the Oppressor.

I decide to head to a certain section of the map that another player is located at and who happens to also be a CEO. As I’m driving toward that area, I’ll eventually extend my wings out, lift off the ground to a good height and engage my rocket boost which propels me forward. It is such a cool looking sight and so nice that I’m able to do that with this bike.

I end up not going after that player like I had originally planned and instead head towards the freeway. I end up going in the air and gliding towards a major freeway interchange and then land on one of the ramps. 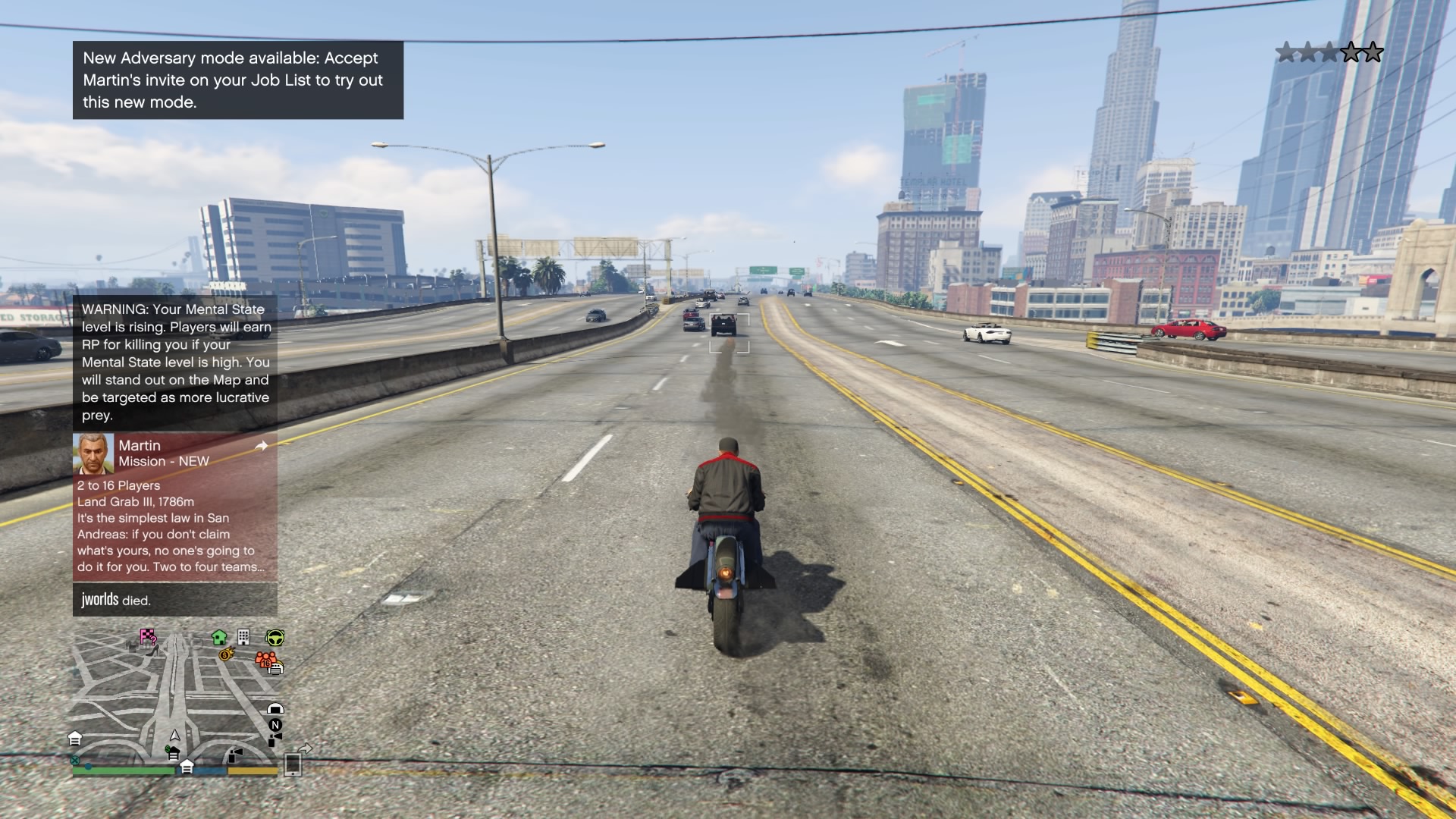 Once I get on the main part of the freeway and head into the direction I want to, I decide that it’s time to bring down some destruction. I start firing missiles from the Oppressor towards some of the random traffic on the highway causing multiple explosions.

Of course, this quickly gets the attention of the police as I get to a 3 star wanted level. My homing missiles automatically lock onto the incoming cop cars and I’m able to blast them away even while I’m flying in the air.

I’ll eventually make my way off the freeway and glide around the large skyscrapers of downtown Los Santos as I’m still being chased by the police. Soon though I end up crash landing, but I make a quick recovery, hope on the bike, and quickly speed away.

As I’m driving down the streets of Los Santos, I quickly spot another player whom I decide I want to take out. A nice chase ensues and he tries his best to get away from me, but he ends up crashing and I lock on with a missile and watch the fiery explosion of his vehicle that results and ends up killing him.

It is actually nice to be on the offensive for a change as I tend to be on the defensive, trying to get away from other players that tends to result in multiple deaths for me.

With that taken care of, it’s time for me to get rid of this wanted level so I head underground via train tracks and just simply wait for my 3 star wanted level to disappear. When I re-emerge from underground, I head towards another player to take him out. Unfortunately, I end up blowing myself up and destroying my awesome bike.

I have no choice but to call Mors Mutual Insurance so that I can get a replacement and since the destruction of my bike was my fault, I end up having to pay a hefty $20,000 for a replacement. I do have quite a bit of money at this point so it really doesn’t hurt me much financially.

If you want to see all of this in action and more, you’ll want to check out the video below. To sum up the rest of it, I end up getting killed a few more times by other players, crashing, and even ending up on top of a freeway sign.

Feel free to post comments below of what you think about the Oppressor in GTA and whether you have had any great experiences with it.

2 thoughts on “The Oppressor in GTA”