There have been some new updates for GTA 5 here within the last week or so and some of them make certain challenges or modes much more fun to try out. In the Cunning Stunt Races, a new special or unique vehicle circuit has been added.

I haven’t tried out many of them yet, but I have been able to give one or two of the new circuits a try at least. As mentioned above, they yield new and unique vehicles for these types of races.

One of them is known as the Rocket Voltic which I have to say is definitely a cool vehicle to use. It sports a large rocket boost on the rear of the vehicle and is definitely much needed and appreciated in order to make some of those insane jumps or needed speed boosts.

You’ll get to see a video at the end of this article where I race in one of them. I didn’t win, but it was still fun to try and glad that I at least still earned some money.

Another one that I got to try was a course where you use kind of what seems to be an ATV, but with certain abilities. The course I raced the Blazer Aqua on featured a combination of asphalt as well as many water areas. The cool thing about it is that once you land in the water, with the tap of a button, the wheels flip out and it becomes more of a water ski or ATV in the water.

At first I didn’t realize this as I got quickly behind everyone at the beginning of the race when we came upon the first water section of the course. I didn’t like how I was quickly losing speed, but once I figured out you had to push a particular button on the controller to flip out the wheels, then I began my quest to catch back up with the rest of the racers. 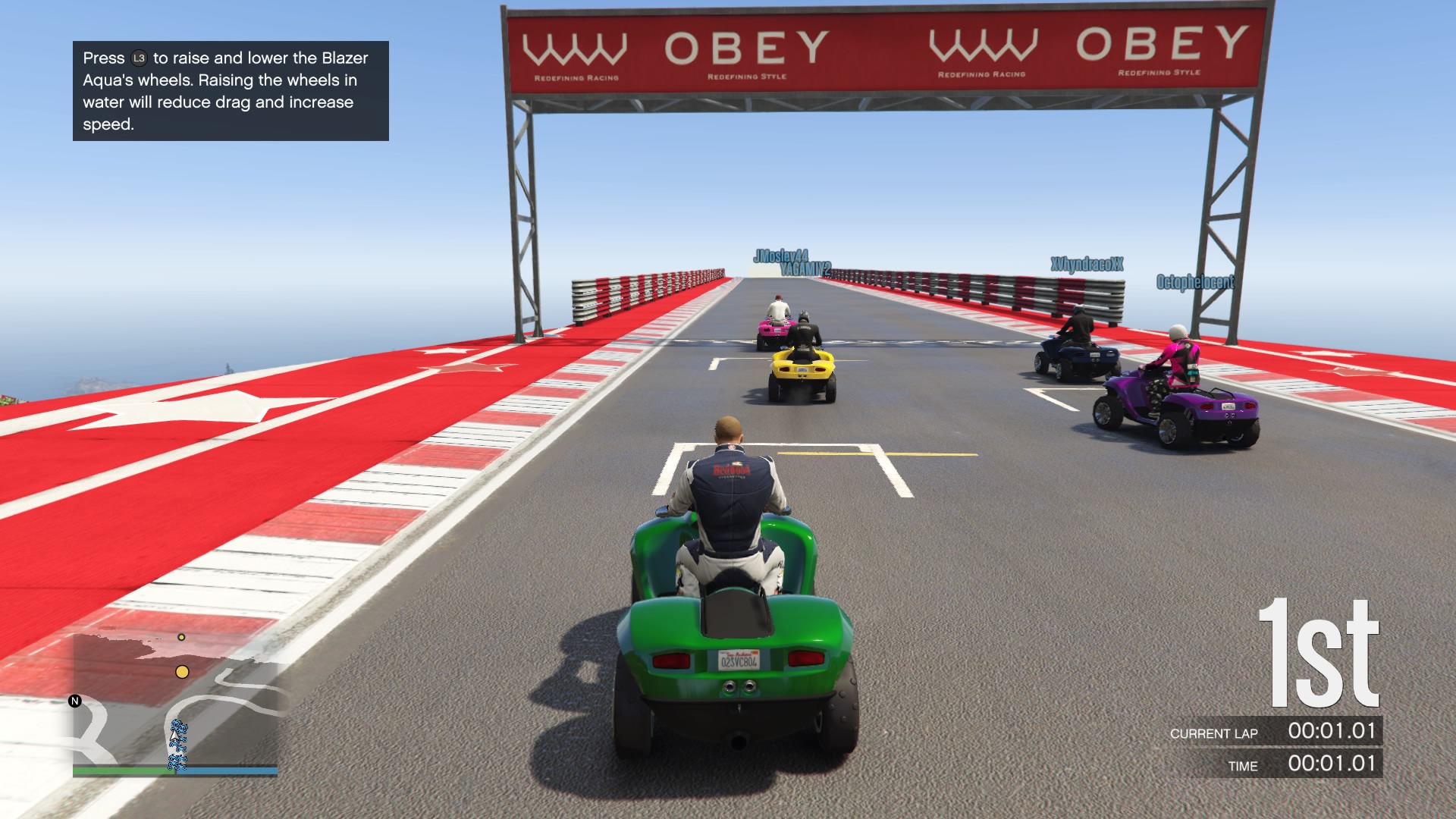 I did not win that particular race either, but I did catch back up to a few of the other races and did not come in last. I will definitely have to give that entire race a try again sometime now that I know what to do.

There are some other updates that have been released that add to the unique vehicle circuits as well. There are new these new stunt tubes that can take you to wild places and some walls are destructible too. If you are one who likes to create tracks, you’ll be able to use them and other things as well. Give these new updates a try if you haven’t already.

Now I want to give an update regarding my last article which was about how the Survival Mode has gotten much tougher for me, mainly the El Burro Heights survival. I was playing it a lot today, but not passing all 10 rounds as I kept getting killed mainly in the later rounds and a lot of the other players with me kept getting killed too.

I kept getting killed by the Merryweather soldiers in either the helicopters flying above or where some of them like to hideout now and surprise me. It’s hard to remember to throw some sticky bombs in that particular area so once they hideout over in that spot, I can blow them up. I probably successfully completed all 10 rounds probably only twice out of the many times I played the El Burro Heights survival challenge.

Another survival challenge I like to play is the Sandy Shores one as well and that one is starting to get a little more challenging as well. I will talk about that some more here soon, but in the mean time, enjoy the video below of my race using the Rocket Voltic.

2 thoughts on “The Latest GTA 5 Updates”