I’m back and with a brand new open world game to play! Back on Friday October 7th, a brand new game was released which I’m sure most know was Mafia 3. I did get this game on release day and I’ve finally had some to time to play with it a little bit. There will definitely be a full review after I’ve spent a significant time playing this game.

My Mafia 3 Impressions are pretty good so far. I was fortunate enough to pick up the Deluxe Edition of the game which comes with a Season Pass (I can download new content without needing to pay for it) and some weapons and vehicles you can download and have from the get go.

It took a little bit of time to install the game, but once it was finished I couldn’t wait to start playing the game. I must say that I really like the music of the game when I first loaded it up. Jazzy tunes to the classic rock of the late 1960s.

I can already tell that the story of Mafia 3 is going to be absolutely superb. I know other reviews from around the internet have said that the story telling, acting, and characters is the strongest part of the game.

It really is neat how the main character of the game is introduced which is Lincoln Clay. You’re quickly introduced to another character in the game whose name is Father James and he starts talking about Lincoln, who he is and how things have changed with him since he first met him.

I really like how the game does that as you can tell the story is going to be very deep and like watching a major television show.

When I’m finally able to take control of Lincoln and start playing the game, the main character and another person are dressed up as security guards and both of them talk about how they’re going to hit a Federal Reserve in New Bordeaux. Some of this also serves as a tutorial of sorts so that you can get used to the mechanics of playing the game.

After learning some of the controls, I get Lincoln and the other person to get into an armored truck and start driving into New Bordeaux. The route is already marked to get to the Federal Reserve so it makes it pretty easy to get there. 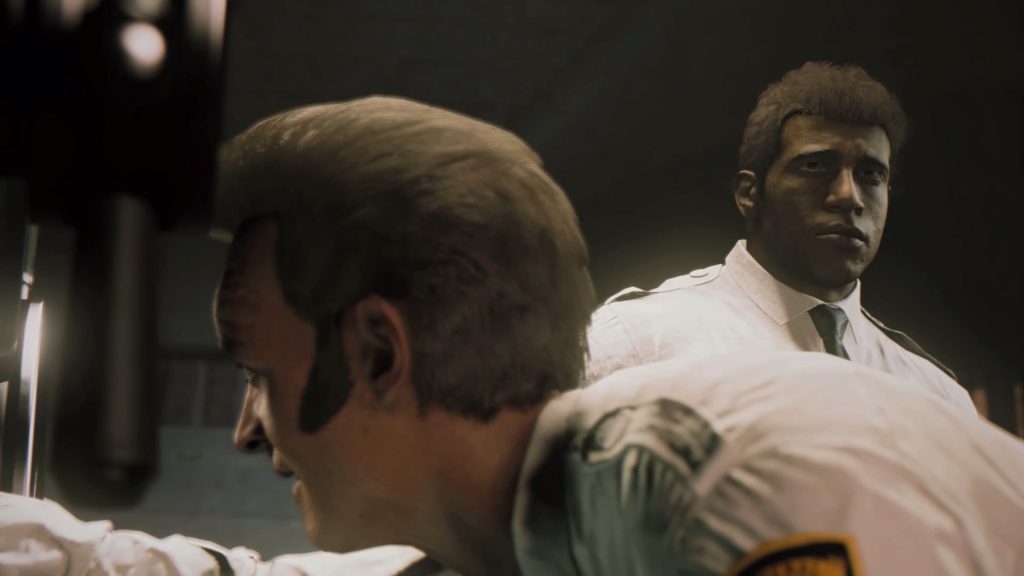 I really like the banter between Lincoln and the other guy as you get a feel for how the rest of the game is going to play out in terms of characters interacting with each other. I can tell you right now this is NOT a game for kids to play.

The language is strong and the themes of the this time period are definitely present since it has to do with the Vietnam War, mob control, and the racially charged south of the 1960s.

As I’m driving to the Federal Reserve I take a look at the architecture of the city and it certainly fits with the time. The vehicles definitely resemble what they would be of that time period and the downtown district of this city does not have as many of the modern day skyscrapers as the city of New Orleans actually does today.

When I finally get to the Federal Reserve and are led down to the lower parts of the building where the vault is, I soon become thrust into combat as the heist of the money at the reserve begins. This is where I learn the controls of what to do in combat. I like how you’re able to take cover and I can tell I’ll be doing that a lot in the game.

Just as it looks like things are about to get really bad, the scene changes and goes back to an earlier time when Lincoln returns to the city of New Bordeaux from his time with the military in Vietnam. This is also where you start to learn more of his back story as Father James starts to go into some detail. You also see Lincoln Clay’s brother as well.

This concludes my first impressions of Mafia 3 and I will definitely resume playing the game here soon so I can get deeper into it and give a proper review of the game. In the meantime, check out a short video below of my drive to the Federal Reserve building. As always, feel free to post comments.

2 thoughts on “My Mafia 3 Impressions”