After my recent gun running experience in GTA V, I’m trying to get more heavily involved in it especially since I unlocked new missions that can only be accessed through the Mobile Command Center.

I have unfortunately not been able to try out any of those missions because they require other players to join in and sadly, I have not had any others wanting to participate. I’m not giving up hope though and will continue to try so stay tuned for that.

In the meantime, I can still do other things with my gun running business so I will continue to resupply as necessary and sell more stock of weapons once it reaches a point where I can get a pretty good monetary return. Without further ado, here’s my most recent experience with gun running in GTA V.

When I started up the game, I had to drive clear to Los Santos and register as CEO just so I could go back to my bunker and log into the computer so I could choose whether to resupply or steal supplies, sell stock, and other things that I might deem necessary.

Well the good news is that I won’t bore you with that part of it in the accompanying video. The video fortunately, starts when I’m back at the bunker after registering.

As you’ll be able to see from the video, my stock supply has dropped dramatically to around 50% and I decide that its time to get some new supplies. Do I buy supplies or do I steal them? Buying supplies will cost over $45,000 and I’m trying to get my money back into the million dollar range and that just won’t cut it for me.

So needless to say I choose to steal supplies. I’ve pretty much done all the supply missions that the gun running update allows so I pretty much know what to expect. Last time I had to shoot down helicopters in order to get supplies.

This time however, I have to head into Los Santos and over to the Rancho Water and Power Plant. Agent 14 wants me to take care of some people over there and once that is done, he will reveal the location of the much needed supplies.

I’m able to take my heavily armored muscle car this time so I’m able to get there just a little faster. I have over 30 minutes to complete this mission so I shouldn’t have too much trouble right?

I’ve mentioned that I have done pretty much all the supply missions already and this one is no exception though I’ve done this particular one only one other time.

Once I arrive at the area I needed to, I immediately see a lot of red blips on my radar which indicate the power plant is heavily patrolled and that I’m dealing with some major fire power. What also has me concerned is that there are other players in the game not far from the area and I fear they might get involved and try to kill me.

As you’ll soon see, my fears are not unwarranted and things definitely turn deadly. Once I arrive, I get out of my car and start firing at my first target in sight which is an armored vehicle. I start immediately getting shot at as a guard or whomever, comes out of the main entrance and starts shooting at me. 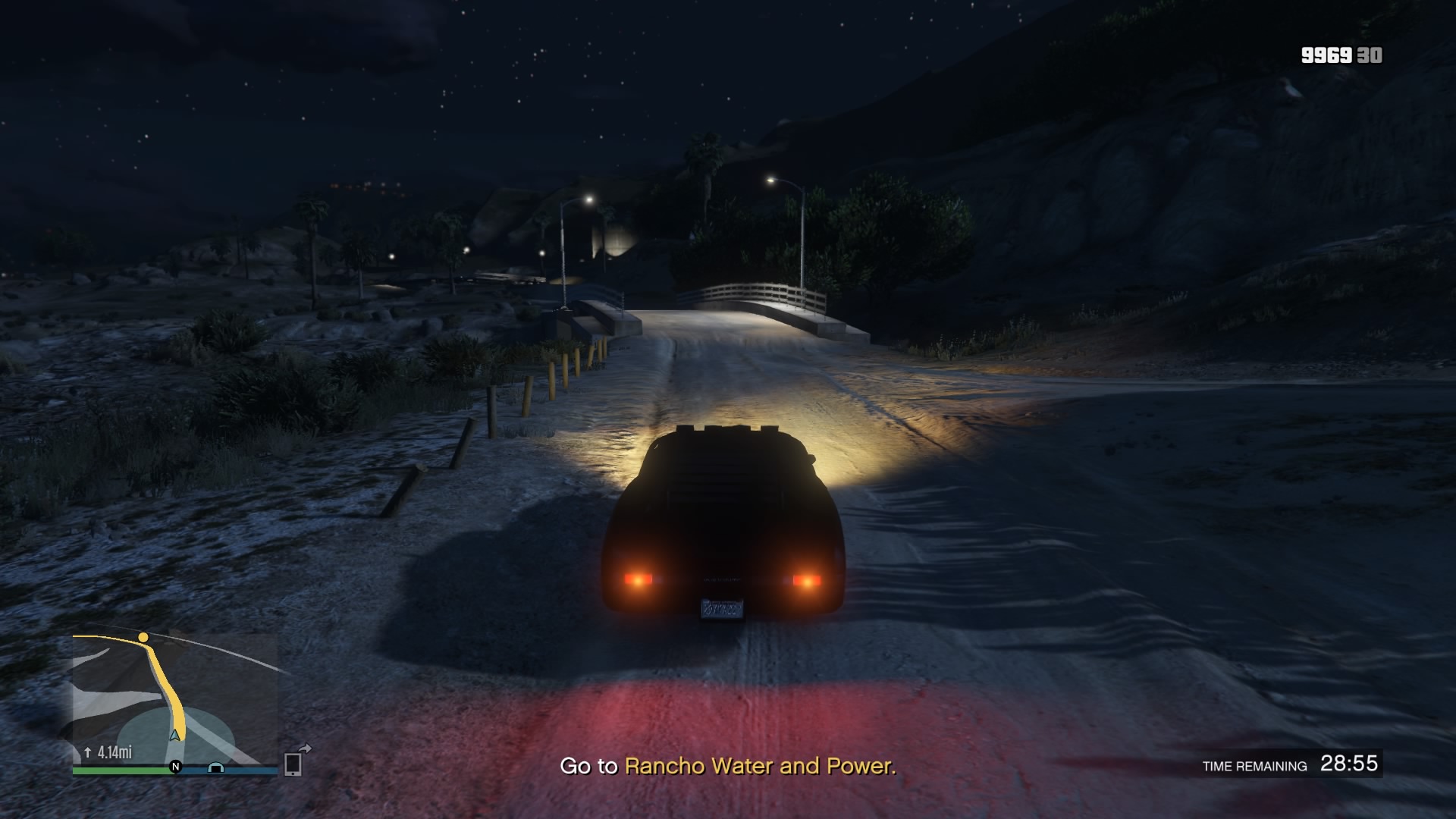 Not long after that happens, I back up across the street, but immediately notice a player rapidly heading towards me in a car and I manage to back away just enough to keep from getting ran over. The player zooms past me in a cop car, but he immediately brings with him another problem.

The cops were chasing after him in full force and unfortunately, I end up targeting one of their helicopters and accidentally shoot at it. I immediately get a wanted level and I’m now being targeted by the police and the henchmen that I’m supposed to take out.

I cannot take the onslaught of both parties and I’m immediately killed. Once I respawn, I immediately head back to the area and I take out the armored vehicle by throwing a sticky bomb on it and detonating it.

After that is taken care of, I get to the main entrance and things really get crazy. Multiple gunmen are firing at me, from the ground level as well as up high, but I’m also taking some of them out with my heavy assault weapon. I am taking some hits, but I soon spot a crate that’s likely a weapons cache that I need to take out.

I get out my grenade launcher and take two shots at it with the second shot destroying the crates, but sadly I’m taken out by one of the gunmen with a shot to the head.

As soon as I respawn, I see a helicopter spinning out of control and then quickly exploding not far in front of me. Thankfully it’s far enough away to where it doesn’t do any damage to me. I see multiple cop cars racing down the street, but thankfully they are not after me.

I make my way back to the Rancho Water and Power plant once again except I don’t go back through the main entrance. I instead climb over a fence and then climb on a ladder that goes over the wall and into the plant.

I immediately start getting shot at, especially from a helicopter flying above me. I take out one of the shooters and then get my homing missiles out, but the helicopter suddenly starts spinning out of control quickly and descends and then explodes.

Now that their air support is gone, I start taking out more targets and crates. I take out another helicopter that hasn’t left the ground by throwing a sticky bomb on it.  I still have more targets to take out and there are some gunmen left as I’m continuously taking fire and my health is rapidly depleting.

I’m about to target a gunmen and shoot at him, but something near me explodes and I die instantly as I see fire now around my dead corpse. I’m getting tired of getting killed and head back to the place once again.

Once I’m back in the main area, I find a ladder on one of the buildings and climb up to the top. I see a gunmen on the ground level running towards me and shooting at me, but thankfully misses. As soon as I’m on the roof of the building, I see an injured gunmen and I finish him off.

After he is finished off, I start targeting gunmen on the ground and take two of them out and then destroy another crate. Now I try targeting another crate on the ground, but I end up falling off the ledge, but thankfully not to my death. I just have some health taken out of my main health bar.

After I get up, I hear another gunman nearby and see that he’s hiding behind a pillar. I end up taking him out and now all that’s left are the remaining crates and vehicles that need to be destroyed.

As I head to the location of the supplies, I notice that it is in a van and I’ll have to leave my muscle car behind. The van is sluggish and takes a bit to get up to speed and as I start follow the route back to the bunker, I notice that there are two large red circles on my radar quickly heading towards me.

About 20 seconds later, I hear lots of gunfire and the van I’m driving starts taking hits. I do crash a couple of times, but I manage to maintain control still and get back on the route I need to follow to get to my bunker. Not much I can do about the cars following me and shooting at me and even though the van is taking lots of gunfire, it shows a nice resilience and manages to remain in one piece. 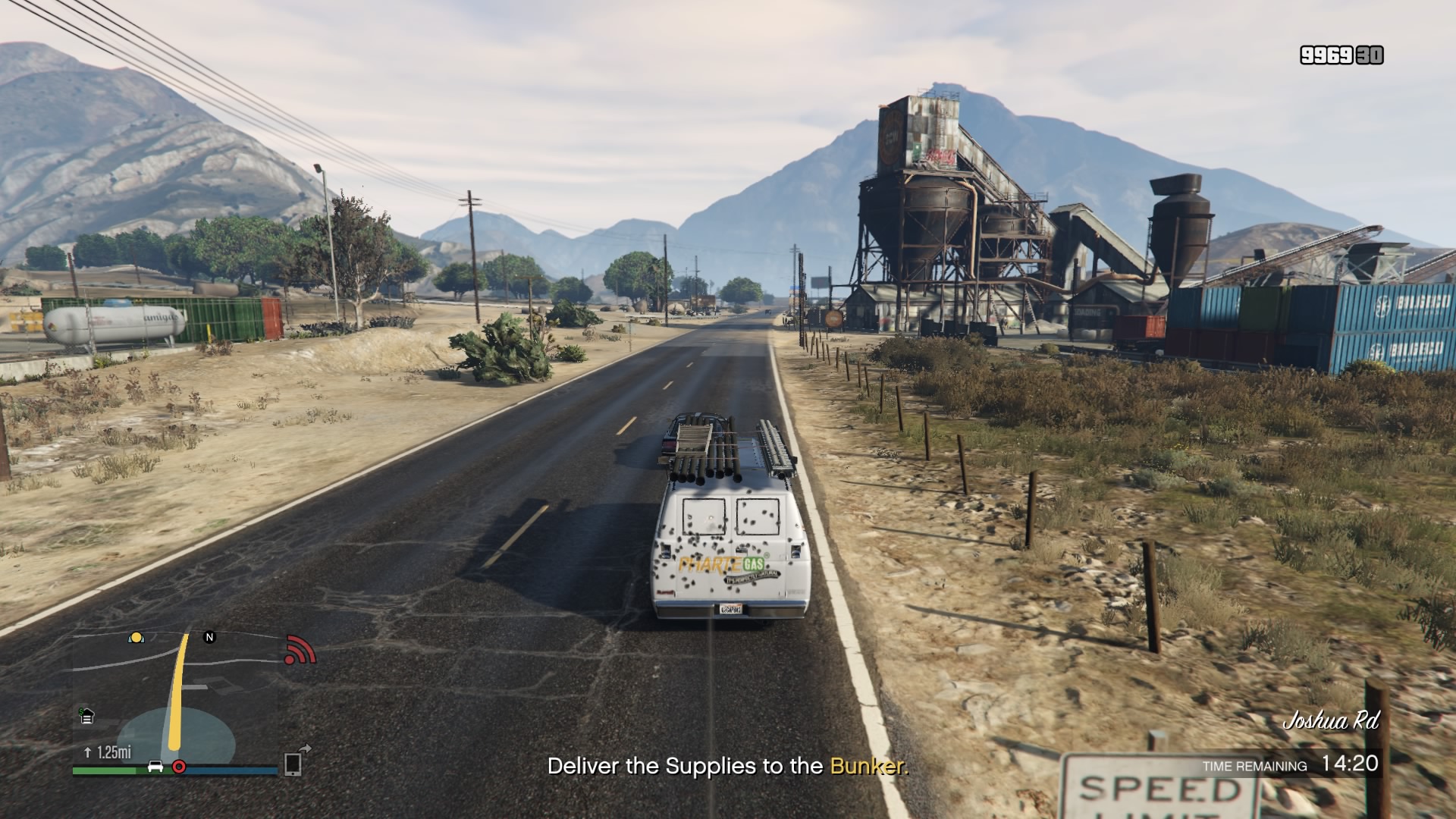 I eventually lose one of the cars that’s chasing me, but the other one follows me back clear to the bunker which is crazy considering I had to get clear outside of the city and far into the country side while dodging traffic and trying to dodge gunfire when I can.

One thing to note during all of the chaos at the Rancho Water and Power is that my muscle car was impounded. It probably happened after I mistakenly targeted the police and was killed.

Fortunately, the impound lot was actually pretty close to my location and so I was able to hop over the fence and get my car (somehow without attracting the cops), but as I mentioned earlier, I had to leave it behind because the supplies were in the van.

Once I made it back to the bunker, Agent 14 congratulated me and said the supplies were ready to be used for the weapons stock and creation. Something else to note is that my Research level is nearly full so I should be seeing some new or modified weaponry pretty soon.

Well folks, that’s the latest of gun running in GTA V. There’s definitely more coming and you’ll definitely want to check back as I reach the full level of research and hopefully be able to try out the special missions in the command center.

In the meantime, you can check out the video below of my entire experience with the supply mission. Oh and in case you’re wondering about my car that was left behind, I was able to retrieve it as it was not damaged, destroyed or even stolen by other players which is an absolute miracle. Feel free to post comments and enjoy the video!

2 thoughts on “Gun Running in GTA V: Time To Resupply”