If you read part 1 of my survival series, I talked about two of my favorite places that I do the survival challenges at. My most favorite is El Burro Height followed by GTA’s Sandy Shores and it is Sandy Shores that I will talk about in Part 2.

Sandy Shores is not located in Los Santos and is instead located in neighboring Blaine County which is to the north of the city of Los Santos. It just a small town out in the desert, but it is full of rednecks so when you go to this particular survival challenge, that is who you’ll be facing instead of the agents of Merryweather. The below map shows you where the Sandy Shores challenge is and is fairly easy to find. 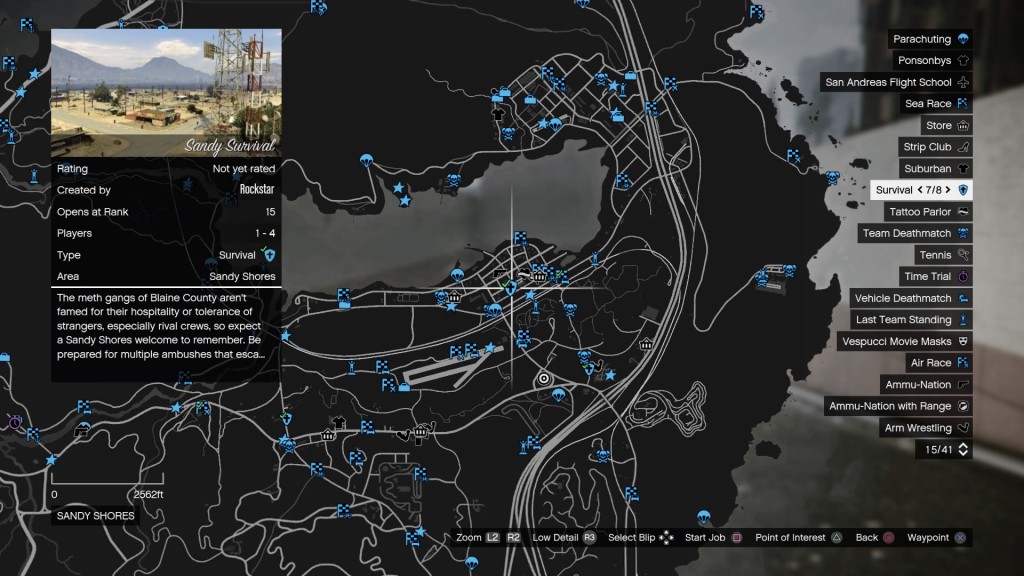 There’s not really much to this town and you can certainly tell that it had better days compared to the present. Still though, there are some good places to go for cover one of which is kind of surprising, but does actually work well. For the first 3 waves, I basically hide in some kind of crate or water crate as it is fairly easy to take out the roughnecks in the early rounds. When you watch the video, you’ll see what I mean.

Once I reach wave 4 though and the later waves, I choose a different spot as the crate does not provide good cover with the powerful guns that the roughnecks use. I end up moving into a garage like area with a trash bin that I take cover behind that really does work well.

For the remainder of the waves, (with the help of other players) I start taking out more and more of the enemies in better fashion with a combination of the assault rifle and the Combat MG. You’ll notice also that in Waves 5, 6, 8, and 9, I use the grenade launcher a lot to take out the vehicles that the enemy shows up in which are usually monster trucks to SUVs. Trust me, it came in very handy especially when I needed to take them out quickly.

Of course when the helicopters arrive, I use the minigun to take them out. It is worth nothing that before I was able to buy the minigun, I mainly used the homing rpg which generally did well, but sometimes would miss mainly if the enemy helicopter veered away fast enough. It is best though to use your bigger guns to take out the enemy gunners first on the helicopters before you take out the copter itself. Trust me, those enemy gunners can take you out quickly especially in rounds 7 and 9 so best to take them out first before they get you.

As you’ll see from the video, I do complete the entire wave challenge in Sandy Shores although I did get killed in one of the earlier rounds. Luckily I had another player who was able to take out the rest of the enemies thus ensuring that I did not fail the challenge like I initially did in part 1 at El Burro Heights.