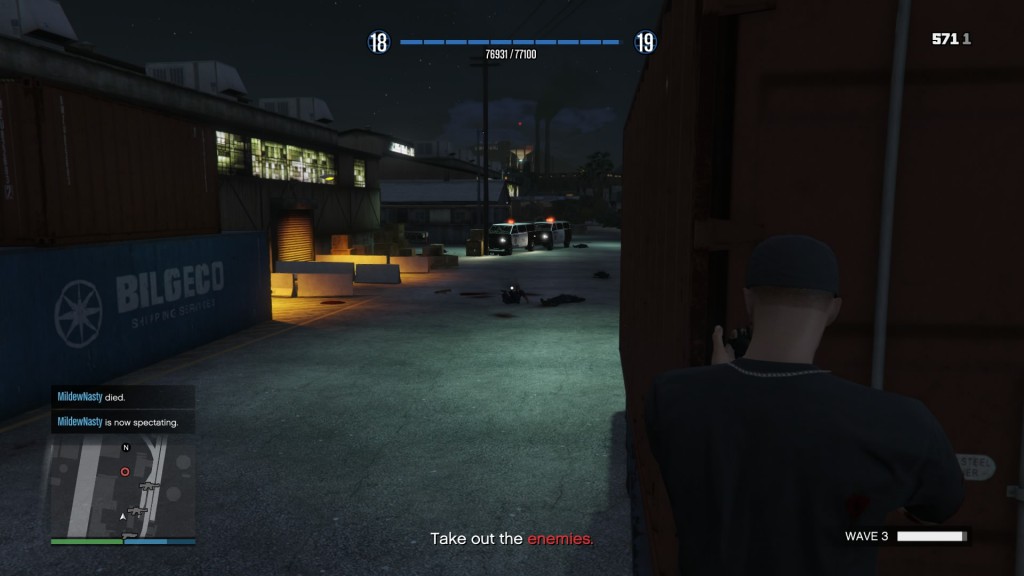 In my review of GTA 5 for the PS4, I mentioned a little bit about the multiplayer part of the game and how I generally did not play it very much as it was very easy to get killed when more experienced players pretty much just want to take others out. Well since the release of the Heist missions for online play, I’ve decided to give it another chance since your character has to be a certain rank or level before you can engage in the heist missions.

When I first started playing GTA V online again about a week and a half ago, my character was just ranked at a lowly 7 and was a very easy target for others to kill. While I have a very nice apartment that I owned as well as a nice garage to go with it (thanks Rockstar for the free money because of problems when GTA Online first launched!), I didn’t have access to much else especially when it comes to weapons and armor since you have to be at certain levels before you can access the more powerful weapons.

In order to engage in the Heist Missions, you have to be at a rank of 12. So I therefore have decided to go on a quest to level up my character so I can engage with others in those wonderful missions as well as get access to other weapons. I knew it would be a challenge and so the question comes up, where do I begin?

Well the first thing you need to do to start ranking up is partake in the various missions, jobs, tasks, races, and more. The game’s cellphone  will pop up with messages from various contacts wanting you to do different tasks. I know a contact named Simeon wants me to find and deliver specific cars to him and will sometimes add other delivery missions as well. I’ve done a few of these successfully, but it is nice that when you are in free roam mode, you can sometimes find one of these cars randomly and deliver them to the docks to get a nice cash reward and some RP (what is used to rank up).

There will also be other kinds of jobs from different contacts where you can invite other players to help you out with. Usually they tend to let you have 1 to 4 players. You can play these missions by yourself, but trust me, it makes it a lot easier when you have other players helping you as you’ll likely get into firefights with enemies as you are trying to complete your task. 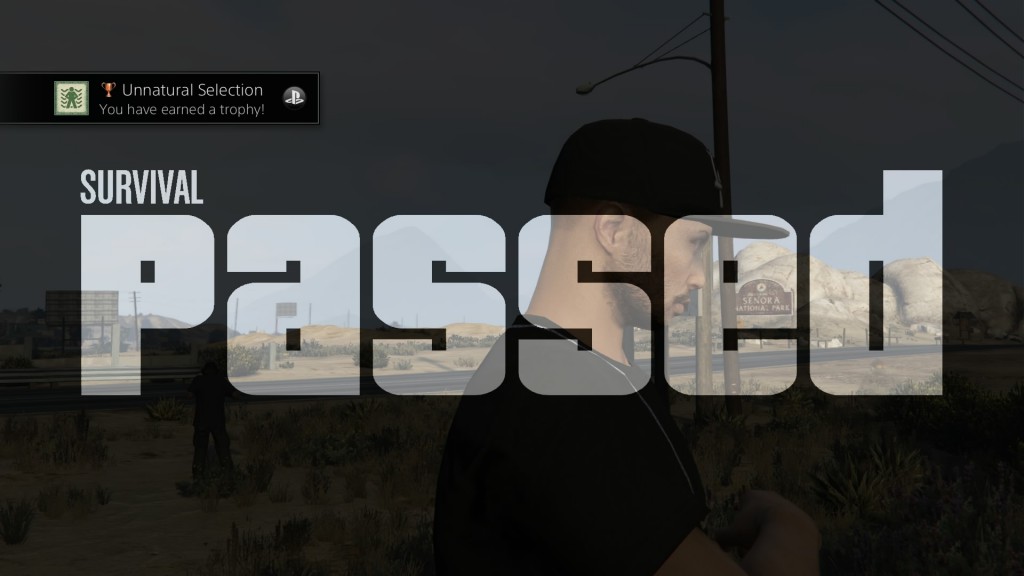 I know there was one mission where you have to steal an RV and bring it to a certain area for the mission to be successful. It sounded pretty easy, but once you got to where the RV was located, it was surrounded by a lot of people who did not want the RV to be taken. Needless to say a gunfight ensued, but because I had a few other players with me, they were able to distract the people by the RV to where I was able to sneak in and drive it away. Sometimes you would get chased by enemies as you are driving to your location, but the other players usually managed to make quick work of them.

I’ve also done another mission where you have to steal a couple of bikes from the motorcycle gang, The Lost. I only had one other player helping me and it was certainly challenging because you go deep into their territory to steal their bikes and believe me they don’t take too kindly to that. One other thing to note too about some missions is sometimes they give you a few chances to try it again if you get killed. They sometimes give you one or 2 lives so that if you are another person helping you out get killed, you can re-spawn where you left off. When all lives are used up though and you or another player are killed, you’ve failed the mission. I was killed once when I tried out this mission, but the second time I was able to fight back and steal a second bike and delivered it to where it needed to be to successfully pass the mission. Got some nice cash and was able to rank up.

The mission or challenges I like to participate in the most though and where I’ve started ranking up the most and earning some serious cash is what is called Survival or Wave. You and up to 3 other players are in a certain area of the game map, such as an industrial plant, rail yard, trailer park, etc.., and you have to defend it or hold off waves of enemies. You’ll have access to weapons, health, and armor so that you can replenish yourself from time to time. There are 10 waves you have to go through before successfully passing the entire challenge.

The first two waves aren’t too hard as the enemies start off with lighter weapons and armor. Depending on your rank, the weapons you start off with can make a difference in those waves of enemies that come in. Once you start getting to wave 3 and beyond, however, it does start to get challenging as the enemies come at you with more powerful weapons and armor, and different areas of the map section to try to take you out. A lot of players start getting killed around wave 3 and 4. The best thing to do is find an area to take cover behind and start blasting away when they get near you.

Something else to keep in mind too is that in the later waves, the enemies will also start coming at you with helicopters and driving up in vehicles as well. After you pass each wave though, the weapons you can receive and replenish with are more powerful as well. You’ll start being able to use rocket launchers, grenades, heavy machine guns, sniper rifles, and more. I’ve successfully passed some of these survival challenges, but haven’t passed them all yet. It definitely helps when you have more experienced players with you in these challenges. Here’s a video of one of my survival challenges:

The good thing about ranking/leveling up is that your stats will get better and you will start getting access to more weapons, vehicles, property to purchase, missions, challenges, races, and more. You’ll able to form a crew and join other crews and once you reach rank 12, you’ll able to participate in the Heist missions.

Just yesterday, I was able to rank up to level 23. I am now happy that I have access the new vehicle mods, weapons mods, access to more clothing, access to give my character different looks, and more. I’ve seen people level up well past 100 and usually you’ll have access at that level to some of the most exclusive stuff in GTA Online.

Something else I’ve noticed as well is that when you start to get ranked higher, different things start to happen. I noticed one time that I stole a car from random non playable character. This game is called Grand Theft Auto for a reason and so I thought nothing of it as I do that all the time in single player mode anyway. Well soon after I did that, got a random text from someone unknown that said I will pay for this. A short time later a message popped up saying a bounty had been placed on me for $9,000.

After some researching, I found out that the way to get rid of a bounty is to go through an entire day in the game (not a full day in real life), or you can ask Lester to help you out (for a fee I believe) to remove the bounty. Be warned though, other players in free roam mode will see that you have a bounty and will come after to try and kill you and receive the money from the bounty. It certainly is very challenging trying to survive or get where you need to go when you have a bounty placed on you.

I also know too that other players have access to some very powerful hardware and vehicles. I was once chased down by 2 players with what looked like a military type vehicle with a HUGE gun mounted on top of it and taking out anything in its way. I also need to mention that it is VERY fast as well! I was driving one of the fastest cars in the game and they were for most part able to keep pace with me! I was able to get away once from them with some good maneuvering through traffic and what not and make it to my apartment for safety.

Other players can place bounties on you as well and as you can see from what I’ve said above, players have no qualms of coming after you to try and get that money. I have yet to go after anyone with a bounty themselves, but you’ll know a player has a bounty on them as they will have a red skull on top of two black bones that form an X as they move around the map. The best thing to do try to avoid getting killed by some of these players is to get out of the city and into the country side as there aren’t usually as many players out there. It can sometimes be easier to hide out there as well via tunnels and ditches and whatnot.

As you can see, I’ve really given the online multiplayer aspect of GTA 5 a try once again and I’m loving it. The survival challenges are fun to do with other players and ranking up to get access to more stuff is wonderful. I plan to start playing the Heist missions and letting you know how those go. I’ve heard they are quite fun and challenging, but if successful, provide some serious cash and access to even more cool stuff. Stay tuned!