Here we are with another round of my first play through of this game.  We are now moving on to Uncharted 4 Part 6. If you remember the last part, Nathan, Sam, and Sully had to get into the auction. It was easy for Sully, but since Nathan and Sam weren’t on the list they had to sneak in.

The next thing was to figure out how to get the cross which they determined was to cut the power and Sam pose as a waiter by the cross so that when the power did go out for a few seconds, he could easily grab it and vanish. We also saw two new characters who are apparently the bad guys also going for that cross.

At the end of that last chapter, Nathan is outside and Sully mentions to him to get to the front area of the large estate so they can get into a car and getaway. This is where I last left off and where I’ll continue on.

Now that there is chaos and armed guards everywhere, I have to be extremely careful. I have to make my way to the area where all the vehicles are, but also try not to grab too much attention. Sully says to follow the spotlights which is what I try and do.

Now as you can see at the beginning I start to jump around to try and figure out the best way to get to where I need to go. I try jumping onto what I thought was a ledge, but I grab onto nothing and fall to my death.

I re-spawn back where I started and try again, but this time I look around and see a spot where I need to jump and go for it. Fortunately Nathan grabs onto the ledge and hangs, but looks up and notices an armed guard on a balcony higher up.

The game suddenly outlines the armed guard in white with kind of an oblong diamond that’s half white and right below all this it says that “The white threat meter fills when there’s danger of being spotted”.  This means basically that I have to be very careful when jumping from ledge to ledge or climbing around guards.

After all of this, I shimmy to the left and out of the light the guard shines where I was previously at. I can also hear all the guards talking which means they definitely think someone is out here. I continue on, but I accidentally fall to my death as I meant to grab another ledge. I’m getting sick of falling! 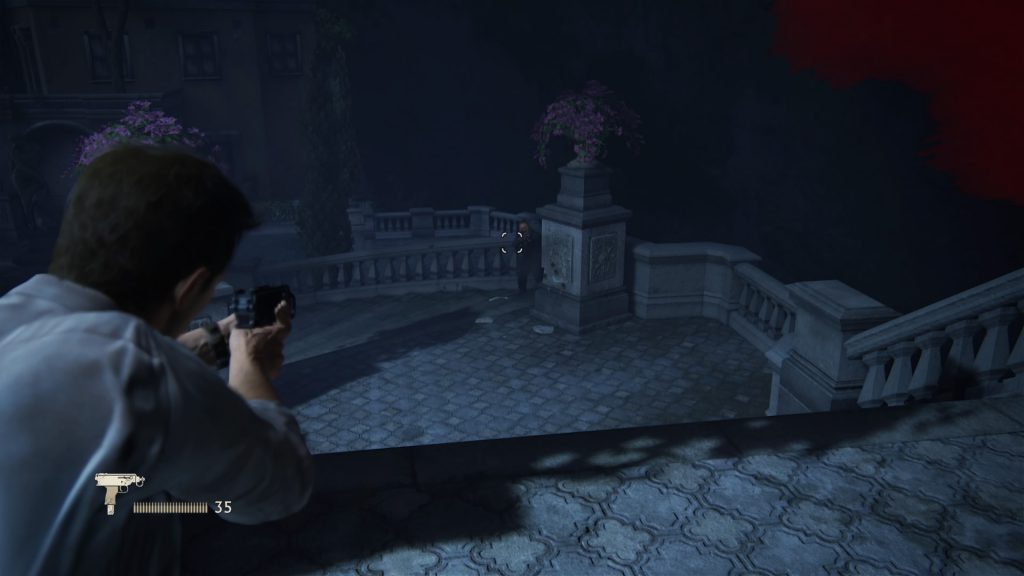 This time I find other ledges and places to climb and keep moving on. I still have to be careful though as I can see in the distance more flashlights and other guards talking in their native Italian.

I keep making my way around after doing some jumping and climbing and climb into an open area, but then I’m suddenly spotted by a guard and I start getting shot at! I don’t have any weapons and so I have to run and try to find somewhere to take cover. I come to another ledge or balcony and get back out of sight.

Eventually I make my way to an area where there’s tall grass which I can use to stay hidden from guards. I do though get spotted again, but I try to run and jump over a railing and hang on the edge, but another guard from higher up spots me and starts shooting at me. I unfortunately fall to my death yet again. I am DETERMINED to get past this point once I re-spawn!

I’m starting to lose health very rapidly and getting near death, but continue fighting the guard while I’m also still getting shot at. The guard eventually knocks off onto a ledge where I am killed. Wow, I have a continuing theme here don’t I?

I re-spawn yet again back at the area where the tall grass is. I make my way past guards and head up some stairs. I climb up high to another area where I have a vantage point and see where the ballroom is which is where I need to go. I’m not too terribly far from it now. I see an open window and climb up into it, jump down and notice that I’m in a room full of books kind of like a personal library.

Nathan starts talking to himself saying that he’s cool, nobody saw him and no one will notice anything unusual. So he proceeds to the door, opens it and guess who’s right outside? You guessed it, Nadine and it surprises Nathan. She says to him that he is not supposed to be back there to which he says the same thing about her.

Nadine then says that he has something she wants to which he then shows her his wedding ring. She then grabs his wrist, twists it and then punches him in the face knocking him back into the room. Nadine says she’s not in the mood for games and orders him to give him the crucifix. After a little bit more talk, Nathan gets up and prepares to fight her.

They both get in a fighting stance, but you can tell that she knows more fighting moves than Nathan. I start to take swings at her in which she’s able to dodge. She then grabs my arm and twists me into an uncomfortable position, but I’m able to punch her in the lower part of her body to where she lets go. 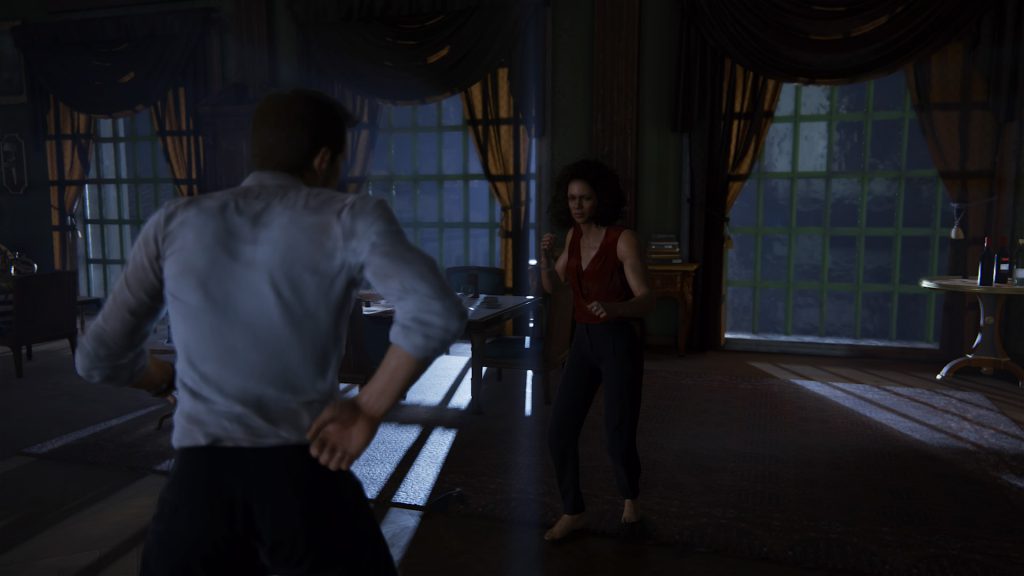 After more swings and misses and an occasional punch or kick that lands on her and some more small talk, she eventually throws me out of a window, but Nathan is able to grab onto a curtain as he’s flung out the window to keep from falling.

I’m able to grab onto a pole where I’m able to swing to more of them in front of me. Sully and Sam, both ask in succession where Nathan is at. Sully says he got a car, but the other patrons are bailing out of there as fast as possible. Sam mentions he’s in the ballroom and that he has a gun. Nathan says that he is on his way.

As I make my around doing some more jumping, climbing, and near falling, I make it to an area where Nathan nearly falls and the guards spot him and start shooting at him. Sam makes his way out onto a rooftop and throws a gun towards Nathan. Luckily he is able to grab it while he’s hanging.

Finally, I can truly fight back! I manage to pull myself up a bit to where I can fire at the guards and start killing them. Sam mentions to Nathan to head to the ballroom and he’ll meet him back there.

Once I fight and shoot my way through a lot of guards, I’m able to get into the ballroom and get back with Sam who’s pinned down with a lot more armed guards. I start shooting at them and killing a few while Sam is also able to help. We do eventually get the upper hand.

Sam and Nathan do make their outside where they have to shoot their way through more armed guards. We finally make it to an area where Sully arrives with a limo and both Nathan and Sam run into it while being shot at. Sully guns the limo and we are able to finally get away from the chaos.

I have to say though it is amazing I haven’t gotten killed in these firefights. The game cuts to all 3 of the characters sitting around a table and looking at the crucifix that they got from the auction. Sam breaks it open and a rolled up peace of paper with a seal on it comes sliding out. They look at it and are able to decipher what it says,

They then determine it is in Scotland at a Cathedral to which Sully asks if Rafe (the bad guy who threatened Sully and was with Nadine at the auction) has been digging there for quite sometime now and came up with nothing?

Nathan responds with yes, but there is a grave site near that Cathedral where the next clue or artifact actually is and Rafe has actually been digging in the wrong spot. After talking a bit more, They all decide they are going to Scotland and searching at the gravesite. Not long after they arrive there, I end part 6.

Well there you have it folks! The brazen crucifix heist from an Italian auction and the great action packed escape! I hope you enjoyed Uncharted 4 Part 6! Check back for Part 7 as Sam and Nathan head to the gravesite to see if they can find Avery’s grave and either treasure or at least the next clue to where they need to go next.