Here we go with another city comparison from The Crew and the real life version. Last time I had talked about The Crew’s version of Las Vegas and the very close similarities to the real Las Vegas.

It certainly had the feel of it as it had many of the iconic buildings, hotels, casinos and more. The Hoover Dam is also not too far away. The only thing I can say that it really lacked was the freeways and highways that Las Vegas really does have. It is one of the very few cities in the game that doesn’t have freeways.

Well now that Las Vegas is done with, time to move on further west. I will talk about and compare the last 3 major cities in the game, which all lie on the west coast, to their real life counterparts. First up is Los Angeles.

As you probably know, LA is the second largest city in the US. It is well known for its film industry known as Hollywood, its major sports teams such as the Lakers NBA team and the Dodgers Major League Baseball team.

The city and its surrounding suburbs are extremely large in land area and the city is also well known for its massive freeway system. The city and the surrounding area has very large and numerous freeway interchanges. Now of course given LA’s size, the freeways do get clogged quite often especially around rush hour, but that is generally typical of many major cities in the US.

Before we get any further though you might be wondering how the game’s version of the city compares especially any freeways if it does have any. I know the last two cities in the game did not have any highways unlike most of the rest of the major cities in the game.

Well I am glad to see that the city of Los Angeles in The Crew has freeways and a good amount of them too. For those of you who actually live in LA and the surrounding area, if you have the game and drove around the game’s representation of it, you’ll know that some of the freeways do follow a little bit of the actual alignment of them in the real city. 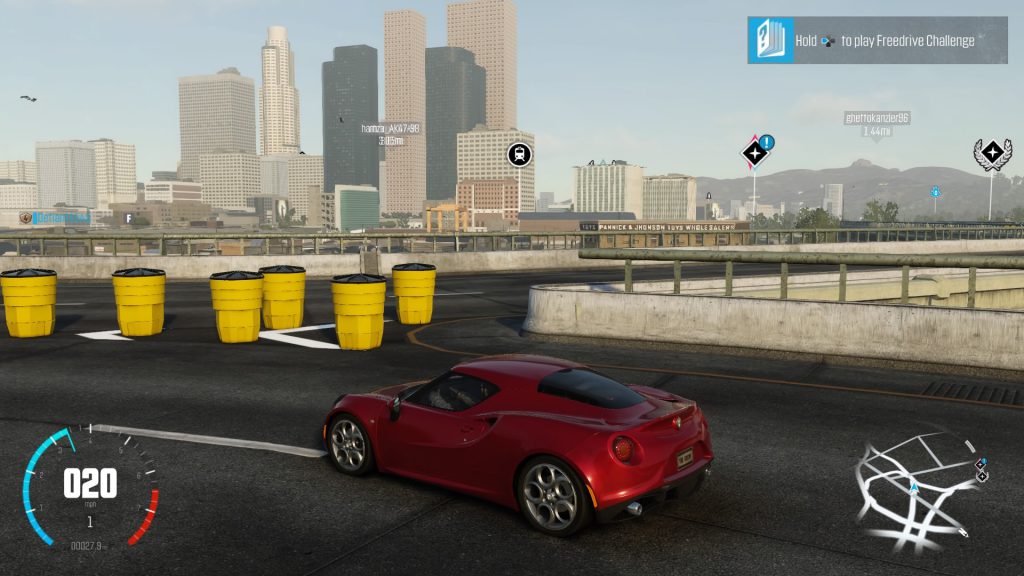 Now this is where I have to go back and mention what I have said in some of my past city comparisons. While the games does have a nice amount of freeways in LA, once again they are not representative of the actual size of them. LA has many freeways that are 8, 10, and sometimes even 12 lanes wide.

The game has the standard 4 lane wide highways as it does with most other cities in the game with the exception of New York City and Detroit. It really surprises me that they didn’t make the highways in the game at least for LA, wider.

Just for comparison here, another open world game that has a representation of LA (though it’s called Los Santos) is GTA 5 and the freeways in that game are much closer to what LA freeways actually look like plus it seems to have more traffic to go with it.

One other thing is that I wish it had the large freeway signs to make it feel more like actual freeways. That’s another thing that has surprised me that they didn’t include. Still though, even though the highways are small in width, I’m just glad they are there versus none at all. A good chunk of the freeways in the city are elevated and those are my favorite kind so I’m at least happy with that.

Ok, enough of about the freeways you’re probably wondering what the rest of the city in the game is like especially LA’s famous landmarks. Let’s take a closer look at them.

One of the first things I noticed coming into this city from the highway in the game is that when I looked off to my left, I could see there was a stadium of some kind and once I did eventually investigate it or drive by it for a closer look, I realized it very closely resembles the baseball stadium that the LA Dodgers play in.

Now as far as the downtown area is concerned, it resembles the real downtown pretty closely. The skyscrapers do mostly match the actual ones which is really nice. LA’s skyline is pretty tall and one of its most recognizable skyscrapers is what’s called the US Bank Tower (formerly the Library tower).

It’s currently the tallest in Los Angeles and also tallest building west of the Mississippi River though that is all set to change next year as a brand new skyscraper that’s currently under construction in downtown LA is set to be completed.

Moving on from downtown, we have Santa Monica and its famous Santa Monica pier. It is recreated here in the game and looks nearly identical with the board walk, large Ferris wheel, roller coaster and more. I like that you can drive up onto the pier, but of course you can’t get out of your car and go on the rides (you can though in GTA 5).

Next up, we have LAX which is LA’s large airport. It is recreated to detail and you’ll definitely know for sure that it’s LAX. I do like the fact that LA is one of 4 cities in the game where you can fly to different sections of the country. It makes it easy and quick to get from one end of the map to another if you don’t want to drive all the way there.

LA’s next famous area is of course Hollywood. It is definitely there in The Crew’s version of LA and all the famous spots are there such as the Hollywood sign, the Chinese theatre, and of course the stars of celebrities that are in front of the theatre and beyond.

Other areas of the city are in there as well such as Inglewood, Century City, Long Beach, LA Harbor, East LA, and even more. I like the fact that the developers included all of that in the game’s version of LA even if it’s a shrunken down version of the city. It is still quite large in the game especially when in comparison to other cities such as Salt Lake City and Las Vegas.

Well there you have it, another comparison of one of the game’s cities and it’s real life counterpart. The developers did a pretty good job overall of making this game’s version of LA having the look and feel of the real city.

The above comparison is all the more reason you should buy this game if you haven’t already. If you love open world games and especially racing games, this is a must have. It’s certainly not the best racer out there, but for the sheer size of the map and the exploration you can do in the game, you just don’t want to pass it up. It’s generally selling for a good price now so if you haven’t bought it yet or have been holding out on it, now is the time to get it.

In the meant time, check out the 5 and a half minute video below of my drive through LA on one of its freeways. Only 2 more cities left to go!

2 thoughts on “The Crew’s Los Angeles”