I’m back with another city comparison from the game vs its real life counterpart. This time we will take a look at The Crew’s Las Vegas to see how it compares to the real version.

Last time I had talked about Salt Lake City, Utah and how it compares to the actual city. It was certainly a good representation of the real Salt Lake, but it is one of the few cities in the game that doesn’t actually have freeways going through it and it doesn’t take very long to drive through the city.

Now that I’m done with Salt Lake City I move on to Las Vegas. Now I’ve never been there in real life, but I know people who have and they have all said it is an experience like you’ve never experienced before.

There’s just so much entertainment and things to do that they say it is almost impossible to get bored. You’ve got all the glitz and glamorous casinos and hotels, gift shops, shows, live performances, restaurants and buffets and many more.

I certainly want to go there some day and experience as much of it as I can. Las Vegas has lots of high rises because of it being an entertainment capital. At night time, Las Vegas is like such a beautiful lit up oasis in the desert. All of the lights shine so brightly that it can be seen from miles away. 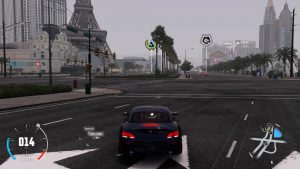 So how does The Crew’s version of Las Vegas hold up? It actually does remarkably well. It has most of the city’s well known landmarks and casinos. In real life, a lot of them are centered or lined up on what is known as The Strip.

The Crew recreates it very well here complete with palm trees and some of the well known locales such as The Circus which is known as The Ringmaster hotel and casino in the game as I’m sure it had to do with copyright purposes.

There are also other spots such as the Eifel Tower and Paris section, New York section, Venice area, and even the very tall stratosphere tower.

Now I will have to say that very similar to Salt Lake City, Las Vegas does not have any freeways going through it in the game like it does in its real life counterpart. There are not a bunch of highways in Las Vegas, but they are there and help to get around the city quicker.

I kind of wonder if the developers were pressed for time and decided to skip it in those two cities and instead opt for what makes them famous the most. Nothing wrong with that, but I like freeways in the games if you couldn’t tell already from my previous city articles about The Crew.

Now the area around Las Vegas in The Crew definitely resembles what you’d actually find if you were driving in the real life version. It is in the desert which a lot of Nevada is known for, but you do see mountains in the distance which you can drive to.

Who can forget the famous Hoover Dam? It is in the game as well and you can drive to it. Las Vegas here in the game is a little bit bigger than Salt Lake City and there are some car shops, tuners and even a headquarters here where you can get your car repaired or switch vehicles.

Now as you’ll see in the video, as I’m driving towards Las Vegas, it does rain thanks to the weather effects the developer added to the game with the last big update to the game known as The Summit. Las Vegas doesn’t get a whole lot of rain especially with it being in the dessert and all so it was a little disappointing to drive to the city in the game from Salt Lake and not able to see the towers of the city in the distance. 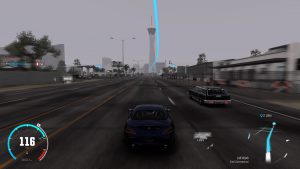 In the game version of this glamourous city, there are challenges and part of the story takes place here. Some of my hardest challenges to complete in order to advance the story were in Las Vegas. I certainly remember having to do a take down challenge that was tough as nails and I had to do it repeatedly even with the help of other players. Still though it was fun to do that in LV in the game.

Well after Las Vegas that leaves just 3 major cities left to drive to in the game and compare to their real life versions! They are Los Angeles, San Francisco, and Seattle. I plan to do Los Angeles next and drive up the coast from there hitting San Francisco and Seattle.

Some other cities out west that I wish they could’ve included were Denver, San Diego, Oakland, and Portland. There is one hidden city out there, but I will keep that under wraps for a future article.

So there you have it folks! What do you think of The Crew’s version of Las Vegas? Does it stack up at least aesthetically to the real Las Vegas for those of you that have been there before? What’s your favorite well known landmark in the city?

There are lots of people that love to try their luck at one of the many casinos in Las Vegas. Some people win big out there, while others just go bust. As I’ve said, I’ve never been to Las Vegas before, but I have been to casinos before in Mississippi, Louisiana, and now in Kansas (yes casinos now exist in Kansas too and no they are not all owned by tribes).

Casinos have popped in most other states in the country, but the casinos in Las Vegas just seem to have something special. If you manage to win big in Las Vegas it tends to be more memorable than if you do it maybe at a casino in your home state (though winning big anywhere is always great).

As always feel free to post your comments and thoughts and read my full review of The Crew if you haven’t already!

2 thoughts on “The Crew’s Las Vegas”