Last week, I got a surprising email that said I had been accepted to try out a closed beta of The Crew 2 for the PS4. I honestly didn’t think I was going to get a chance to be a part of the betas because I thought they had already done them sometime ago.

Well after receiving the email, I read through it to see when I would be able to download the beta as well as how long I would be able to play it. The closed beta would be available from Thursday May 31st to Monday June 4th. The full game is actually slated to be released at the end of the month so the developers are probably wanting to see if everything is in order or what needs to be fixed before release.

I know it’s been some time since I’ve talked about the original The Crew game, but with so many other games taking up my time, it certainly has been a little hard to get back into it. Nevertheless, I am excited for the release of The Crew 2. Well without further ado, here is my experience with The Crew 2 Closed Beta.

The vehicles in The Crew 2 is where it will be quite a bit different from the original game. Yes, there will be the regular cars and motorcycles in the game, but now the map has been optimized a bit to also incorporate planes and boats as well.

From the opening moments of the game, I actually got a little taste of it as the game lets you experience just a little bit of each of it in New York City. First up was a street race and the cars look more realistic than the first Crew. Next up were the boats where you get to continue the race, but this time in the river.

Finally, we switched to airplanes to complete the race and it was really cool to fly over the gorgeous landscape and architecture that is known as New York.

This is what The Crew 2 will primarily focus on as you’re no longer just confined to the roads and highways in the game though technically, thanks to some of the add-ons of the first, you could go off-road just not into the rivers. As far as the cars are concerned, real life models will make a return to the game from sports cars to high end models such as the Lamborghini and Koenigsegg.

You’re probably wondering how the game looks compared to the first one. Well I’m pleased to report that the graphics have definitely improved over the previous version. While I thought the graphics were good from the first game, I also thought that they were bordering towards the cartoonish side.

With The Crew 2, it definitely looks more lifelike and more vivid. The cars look a lot more realistic and have such a beautiful shine to them, the colors pop out more and I love how the sun glistens off the roads, mainly wet roads. The draw distance in the game is good, but there is still some pop-in when you get closer to certain objects.

An example of this is when I drove to Dallas in the game. The skyline of the city was definitely visible in the distance and I absolutely love seeing skyscrapers way off the distance and they seem to get bigger as you get closer to them. The problem is though that when you actually get closer to the city, the buildings themselves look bland or don’t look like their real life counterparts at first because the textures seem to be missing until you get up pretty close to the tall buildings.

This could be due to the fact that this is just a specific build of the game and not the full version that will be released in weeks, but since the actual release is not too far away, I will admit that this is not promising. I do realize that the map is quite large though, but it is the exact same map from the first game with maybe some alterations to the cities and the overall landscape, but it looks like the roads and highways are the exact same ones from the first Crew game.

The gameplay and story differ a bit from what was in the first one. First of all, there’s no more going after a cross-country gang as an undercover FBI agent like there was in The Crew.

This time, it’s more about racing and building up your reputation as someone to be followed as you participate in all kinds of races and events. This actually seems more in line with the Forza series and that is certainly not a bad thing. There seem to me different types of groups you can get involved in in order to build up your reputation and unlock more vehicles and new events.

I didn’t have time to get into most of them, but I did get initially get involved with a street racing group out in Los Angeles. Just going from the map, there are others spread out across the country that range from off-road vehicles, airplanes, and of course boats.

The only thing I really got into was the street racing aspect of it. The controls for driving cars and other vehicles is relatively the same from the first Crew, but the controls seem to be a little bit tighter. It’s a little easier to lose control of your vehicle, but it also appears a little easier to drift especially when you hit the brakes at the right time. The controls overall though are still arcadey which is fine for me since I’m not a fan of simulation like racing games and their ultra realistic controls.

I think another change that has happened when compared to the first game is that in the map, it doesn’t look like there are icons to where you search for landmarks that were in the first game. I don’t have any issues with that though as I don’t think that was the developers big focus for this sequel.

One thing that I really like though is that the GPS has been much improved. In the first game whenever you set a way point, there would be a big blue line that would appear above your car that you would follow to wherever your destination was. Overall, even though I got used to it, I really never did like it.

Well this time, instead of that large blue line appearing in the middle of the screen and above your vehicle, it is now confined to the mini map on the lower part of the screen. That makes it a lot better so you can still know where you’re going and also enjoy the scenery in the main screen of the game and not have to worry about that hideous big blue GPS line.

As far as bugs and glitches go, there were possibly a few that I noticed, but they weren’t big game breakers. An example would be the traffic in the game.

I noticed that while driving around in some of the major cities, the traffic is quite a bit thicker vs out in open country. The problem though is that a lot of the traffic just at times pops in and out of nowhere. I’ve seen a few trucks just suddenly pop into existence out of now where while driving on a freeway in Miami. 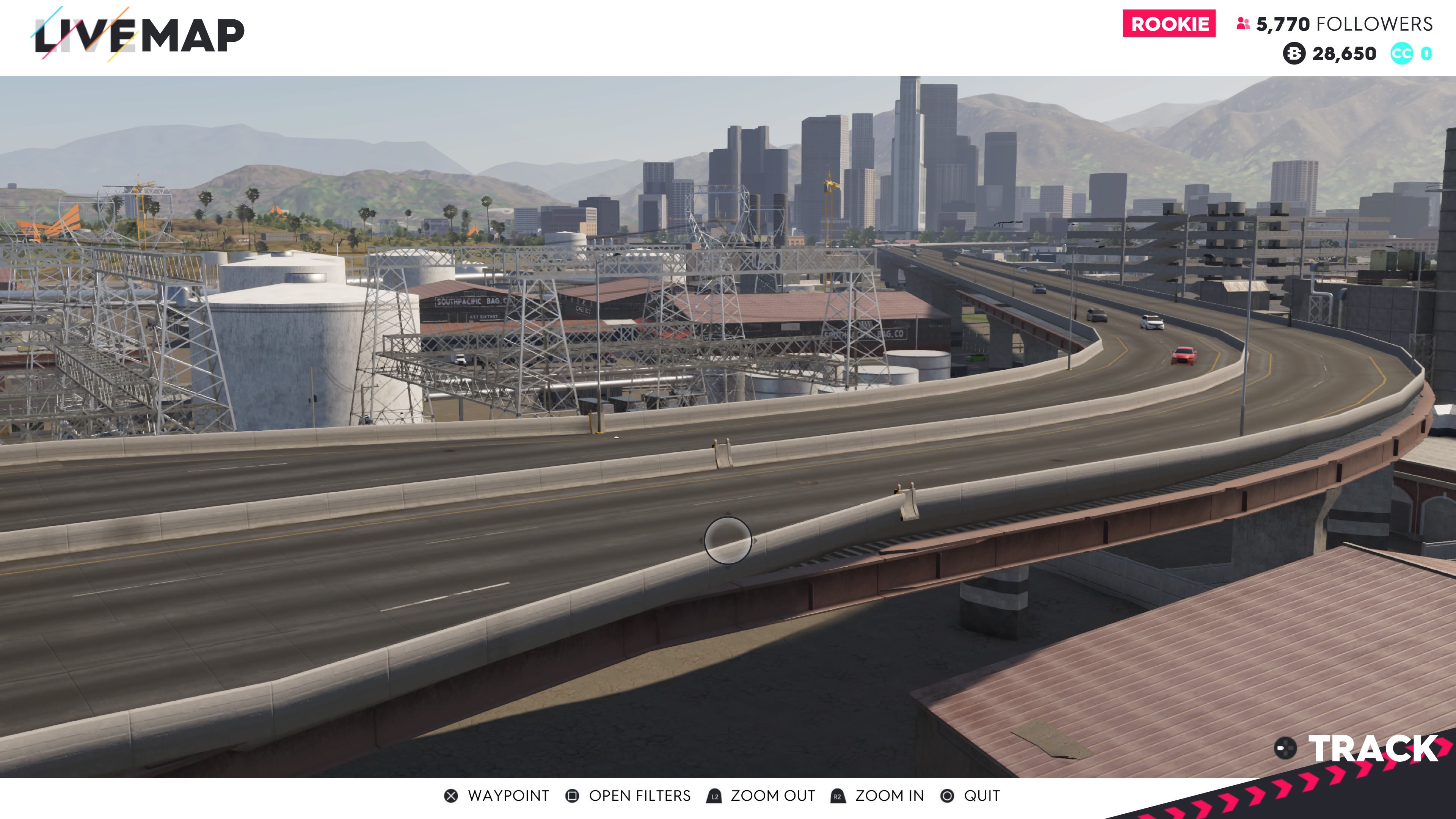 While I was driving on another highway towards New Orleans, I also noticed that on an overpass going directly over me, some of the cars driving on it suddenly disappeared. I certainly hope this is something that they can fix come launch time on June 29th.

As I mentioned earlier, some of the skyscrapers are missing textures until you get really close to them and than they just suddenly appear. That can certainly take away from the experience of the game especially if you’re trying to admire everything this game has to offer including its graphics. Other than that though, those are really the only bugs or glitches that I encountered though I didn’t have much time to get deeper into the game. I’m sure I would’ve discovered more if I had a little bit more time.

Should I Buy this when Full Game is Released

Just based on what I played on the closed beta of The Crew 2, I probably see myself buying this game just because it is type of game I like. I’m not entirely sure though that this game will get great reviews especially if some of the above glitches aren’t fixed.

While the game has moved away from illegal car gangs from the first one, it has added a pretty neat element to racing that allows you to switch between cars, boats, and airplanes, sometimes on the fly which will at times during certain races cause the screen in front of you to kind of roll or turn up towards the sky that looks like something straight out of Inception.

The bad thing though is that people who have played GTA 5 will have already been used to something like this as the makers of that game have added similar kinds of races to its online mode. Other gamers may not see it as refreshing or new gameplay experience considering others are now using its biggest features.

Only time will tell how well The Crew 2 actually sells and what kind of downloadable content the game developers add in the future to keep people playing the game. E3 is gearing up and there is a good chance that the game will be showcased at it before its big release at the end of the month. In the meantime, here’s a video below where I drive around Miami a little bit and than partake in a street race in LA.

6 thoughts on “The Crew 2 Closed Beta”