Rockstar just keeps on giving by bringing out the newest GTA 5 car customization content. According to GameSpot, back on January 10th, Rockstar released a brand new car as well as some customization options that are available at Benny’s Original Motorworks.

The new car that Rockstar released (on multiplayer mode only) is called the Progen Itali GT Custom. I have to say that it looks like one really fast car. You’ll be able to customize pretty much anything on this vehicle that ranges from performance to the looks of the super fast car.

You better believe that the price of this car is up there. At Benny’s shop the cost of the Progen Itali will run at $1,189,000. On top of that, you can expect to spend around another $500,000 for the body kit and other designs that are available.

I have slightly over $3,000,000, but not sure I want to spend that much on that car and its upgrades quite yet. I have a couple of fast cars that I have bought and upgraded that are pretty fast, but it sounds like the Progen Itali may be faster than most of the other high end cars in the game.

I recently went to take a look at it over at Benny’s but I forgot that you can only go there to actually customize and it has to be a specific type of vehicle which are mainly low-riders or whatever else they specifically choose.

So then how do you buy a vehicle from Benny’s (which most of you probably already know)? You have to go the shop’s website in the game and then you can look at it and purchase vehicles from them. It goes to show you how long I’ve been away from Benny’s custom shop.

I had forgotten though that they also offer a few other high end vehicles, one of which costs more than the new Progen Itali GT. There’s also another vehicle that I can get for free, but I already have it at one of my garages and it has been all customized. 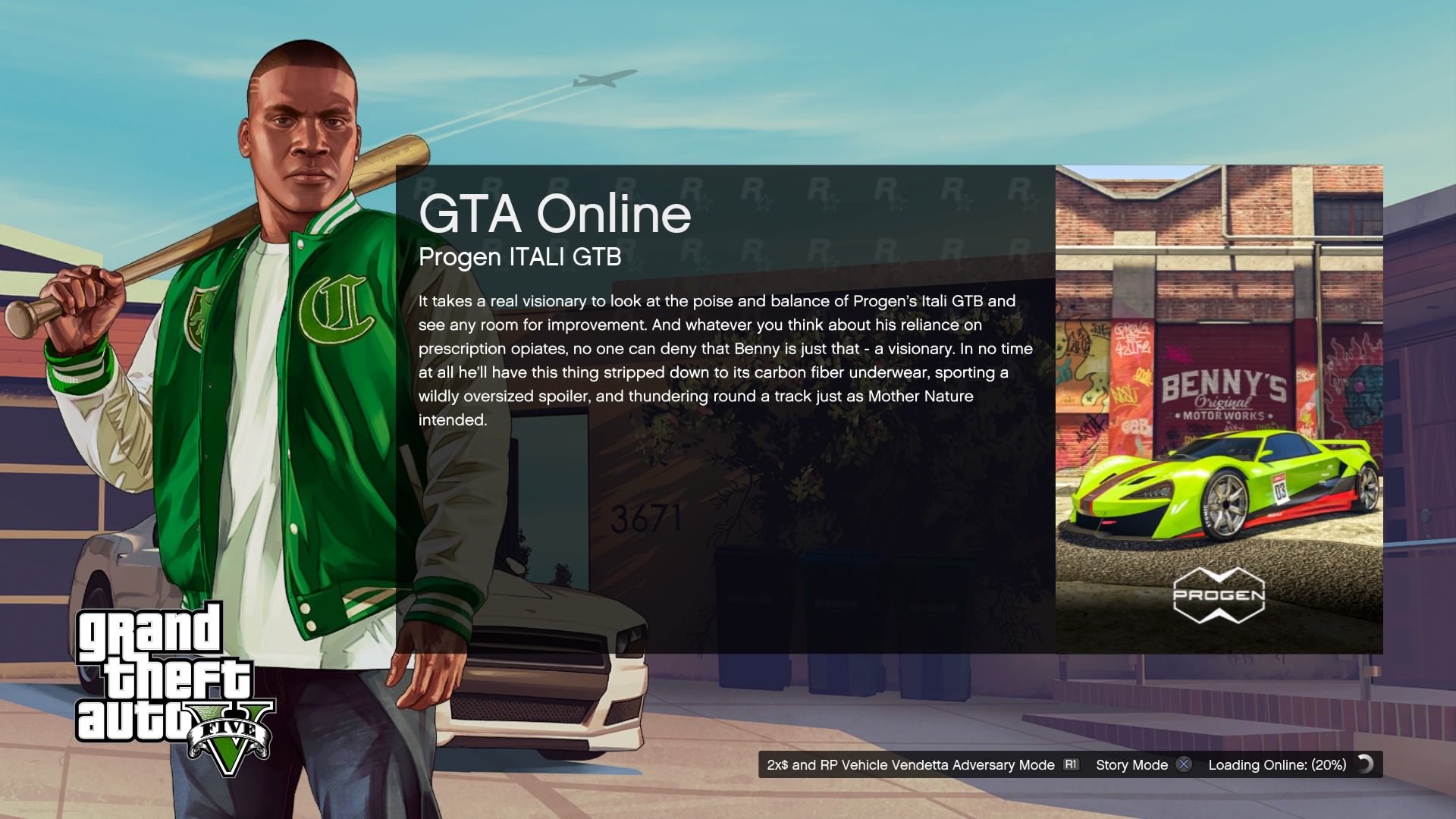 I really do want to get the Progen, but I think I’m going to need to do some more activities and missions so I can get some more money to purchase it and eventually customize it. Yes I do have the money now to purchase it, but I just don’t want to go below $3,000,000.

With all the content that has been released so far, especially in 2016, I am really curious to know what has been your most favorite piece of content that Rockstar has released for the multiplayer part of GTA 5?

I have to say I really like the one with new car races that have the crazy obstacles high up in the sky and other parts of the map. The insane jumps and speed boosts and how easy it is to crash or loose control and cause other racers to go careening about as well. It has also been a good way to get some extra money in the game. Although I’ve very rarely come in first place on those races, I’ve had quite a bit of fun just participating in them.

Another one that I like, though I need to participate a little bit more in is the content released where you can become CEO, own your very own high-rise, and more. I really like concept of it and the missions needed to be done in order to rise up in the ranks. As I said though I really need to participate in it more as I’ve tended to do the races or just do my own thing in the multiplayer.

Well there you have it, GTA 5’s new car customization content that has recently been released. Feel free to post comments about what you think of this new car and if it is as fast as they say it is.