Well it is time to give the Progen Itali GT Custom another drive. If you remember, I had just recently purchased Rockstar’s newest car and got to take it for a spin after upgrades and other customizations.

As I was driving it to Benny’s Motorworks after it was delivered to my garage on Dock St, it was blown to smithereens because of a player flying a jet that ended up destroying my new car and myself. Thanks to the game’s insurance company known as Mor’s Mutual Insurance, I was able to get a replacement and the player who destroyed it had to pay for the replacement.

After doing some stunt jumps with it and seeing how fast it could get, it was time to put it in the garage for later use.

Well I’m glad to say that I’ve taken it back out for some more crazy fun. I decided to take it onto the freeway to where a stunt jump is at on one of the highway ramps that I talked about in the Awesome Stunts article.

I drove my motorcycle from my apartment to the garage on Dock Street where my Progen Itali is located at. I get in couple of accidents on the way there as I hit a pole and fly off my motorcycle doing twists and turns before landing on the ground.

I get back up and get on my motorcycle and start to drive off, but a big SUV drives in front of me at the intersection I’m at causing me to once again fly off my motorcycle, briefly land on top of the SUV and then fall on the ground. After that fiasco, I made it to the garage without incident. 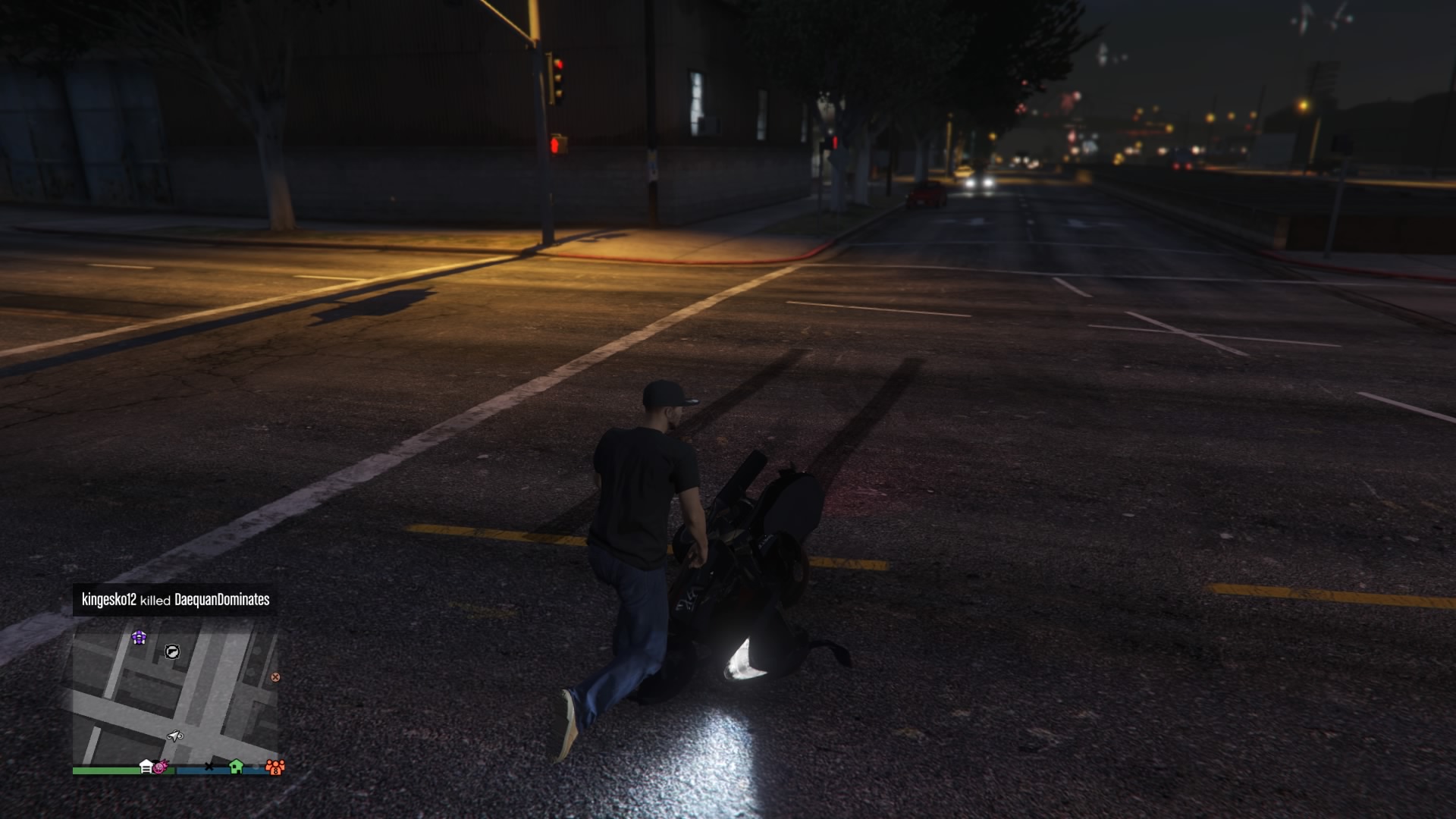 Once I got the Progen out, I drove to the part of the freeway where the stunt jump on a high freeway ramp is located at.

I immediately went off the ramp and landed on another freeway ramp, which had another stunt jump that I went off of but did not quite land it perfectly and instead landed in the drainage canal below. I was able to drive out of the drainage ditch and ultimately decided to try a stunt jump at the airport.

Once I arrived at the airport, I drove down to the lower level and went to the jump where you go flying over the fence and land in the area of the airport with hangers and runways.

With how fast the car is and hitting that ramp just right, it actually makes it somewhat difficult to land properly. While I easily cleared the fence, unlike when I was on the motorcycle and somehow got it stuck in the fence, I just couldn’t land it thus causing me to fail the stunt jump.

I’m not one to quit easily so I kept trying over and over. There were a few times I didn’t hit the jump right as the jump consists of an open dumpster that I at times kept hitting the sides of thanks to the traffic I was trying to dodge.

At one point though as I was trying to dodge traffic, I ended up hitting and killing a police officer and a security guard. I instantly got a 2 star wanted level that went up to 3 because I ran over another officer who was shooting at me.

Things were really starting to get crazy so it was time for me to make a fast exit from the airport! As I was making my getaway, I heard the unmistakable sound of a tire popping which was from my car. I have the cops to thank for that because of them shooting at me.

There was also a police helicopter up above that was following me as well and my car was increasingly taking damage. As I was being chased by the police, I decided to get on the freeway because I knew of a good hideout to go to on the other side of downtown where I could make my escape.

It was not easy getting there as both of my front tires were gone, but I have to give credit to the Progen Itali. It still managed to maintain a good speed even with the loss of the tires and being chased by the cops.

As I was getting close to where I needed to go, a cop car came up right beside me and rammed me, but I managed to maintain control and tried to ram him right back. We were side by side and I managed to get him up on to the rail on an exit ramp to another freeway and nearly got him to flip over. Wasn’t successful doing that, but he had slowed down which allowed me to pull away.

I drove off and got to where I wanted which was an opening in a wall on the side of the freeway. I drove down in it in which it goes underground to an area that is under construction. Fortunately my 3 star wanted level had gone away and it was safe for me to re-emerge without any worry of being chased by the cops. 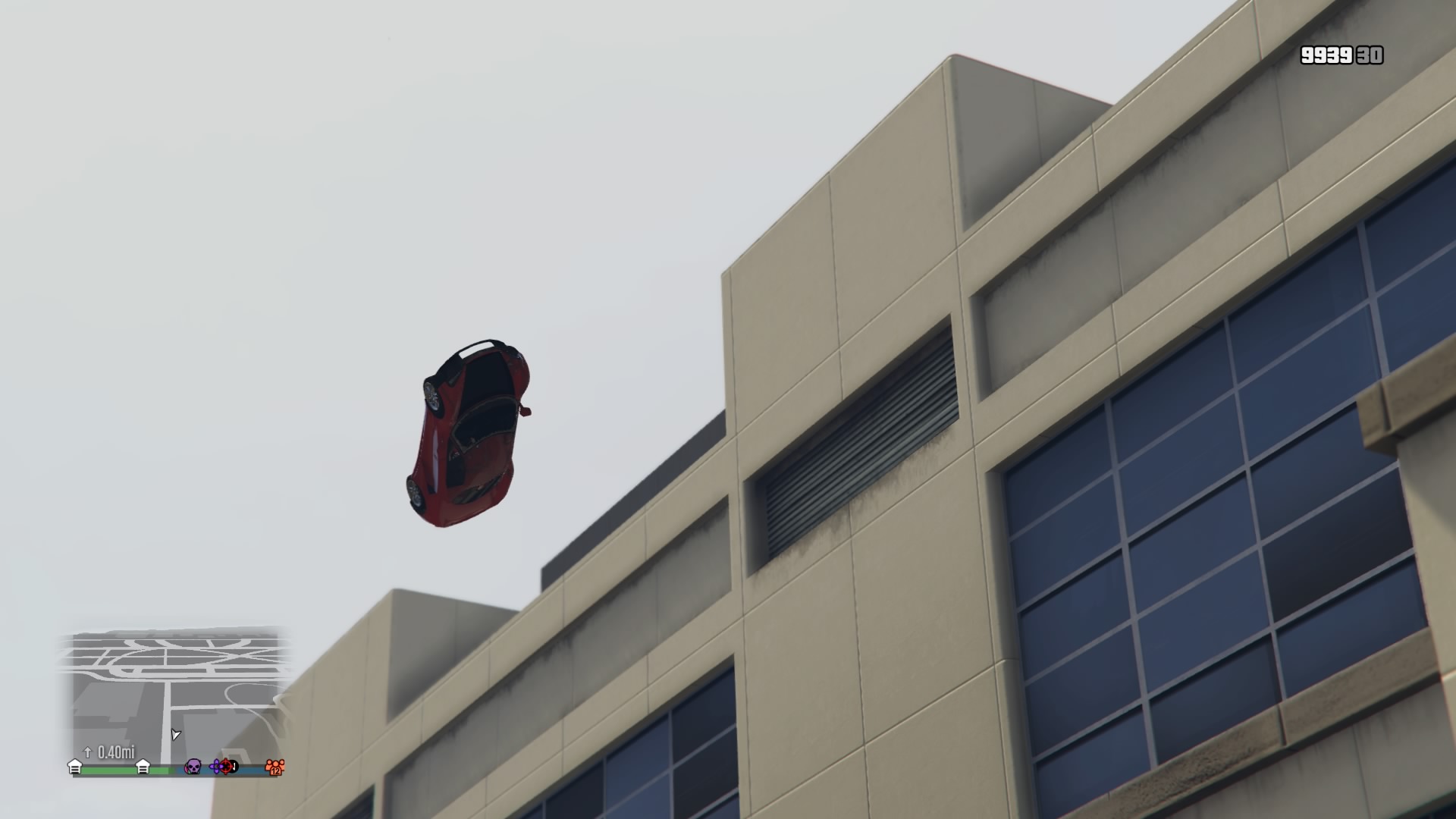 My poor car though was severely damaged and I needed to get it repaired before I do anything else. I also needed to replenish my health and get some armor.

I drove to the nearest Paint N Spray and got my Progen Itali repaired for over $300.00 which really was not bad considering the type of car it is and the kind of damage that was done to the vehicle.

I then drove to an Ammu-Nation and replenished my health, got some more ammo for some of my weapons and then left. I was now ready to head back to the airport and try that jump once again.

Let me tell you, it is so hard to land that particular jump just right because I kept trying numerous times to land it and complete it successfully, but to no avail.

There were times where I was at such high speed when I hit the jump that my car just went end over end and either landing on its side or landing completely upside down. After enough time had passed attempting to successfully land this stunt jump, I decided to call it quits.

Once again, my car took a lot of damage but mostly from the failed landings of the jump I tried over and over. There’s  a Paint N Spray nearby the airport so I took it there to get it repaired once me and decided to take my Progen over to the garage at my apartment and call it quits.

The Progen Itali GT Custom will definitely return and I plan to do more with it so stay tuned. In the meantime, check out the video below that shows everything I described and more. It is definitely a bit longer than the last one, but you’ll get to see a lot of action and craziness in this one.

Has anyone tried out the Progen yet? If so, what are your experiences with it? Do you think the cost of it is too high? Post your comments below.