There are a lot of people who play Grand Theft Auto V online and I am definitely one of those. At first it was difficult for me to do so because I kept getting killed all the time in free mode from other more experienced and higher ranked players. No matter where I went on the map, I just kept getting killed especially with players that had very powerful weapons.

I finally decided at one point that I am going to start ranking up and take on some of these players. Now one thing about the GTA V multiplayer weapons is that you don’t have access to most of them when you first start playing the game online. Similar to an RPG, you have to level up your online created character to get access to some of these weapons.

Now what I did to start leveling up is participating in some of the online missions that you can do with other online players. You earn what is called RP to level up your character. There are also LOTS of other challenges, races, and more you can participate in to level up. When they became accessible, I began doing what is called the survival challenges. There are different survival challenges all throughout the map, but my favorite one is in the southeastern edge of Los Santos called El Burro Heights. It is an industrial area with good hiding places that offer moderate protection when being shot at by waves of enemies which in this case are the Merry Weather private military firm.

As I have leveled up during the last few months, there are weapons I love to use in survival mode. What is nice about survival mode is that in the time between waves of enemies, there are weapons scattered through out that you can collect and use as well as armor and health. My online character is now ranked up to 105 and I have access to most of the weapons in the multiplayer mode of GTA V. Here are some of the main weapons in use in the survival challenges. 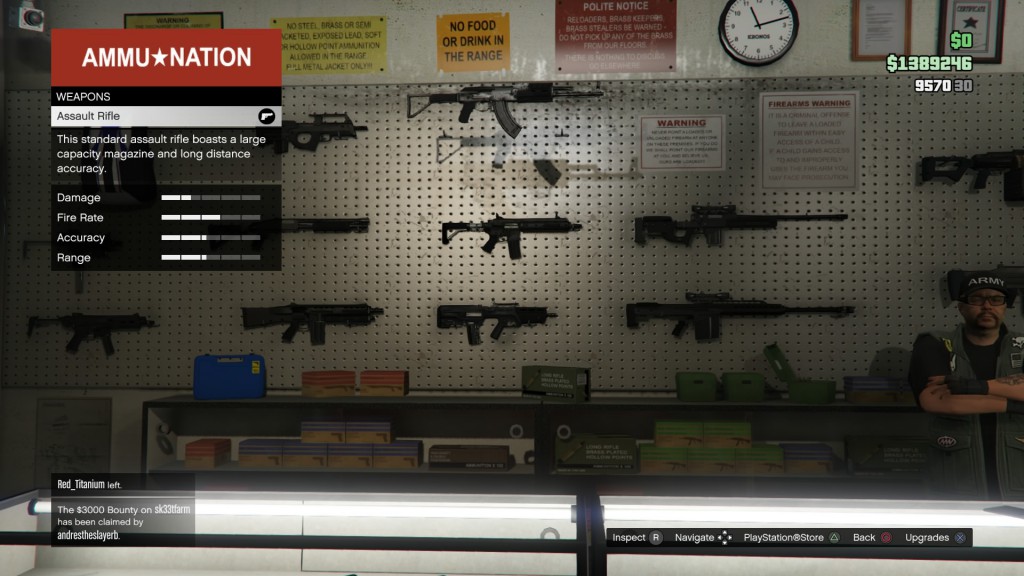 This is usually the weapon I use throughout most of the survival challenges. In the later rounds, I do switch at times to a more powerful weapon mainly when the enemies come at you with stronger weapons themselves. The assault rifle has a pretty nice fire rate and ok accuracy, but it is good to use in the beginning rounds to take out the enemies quickly. If you have the rank and the money, you can have almost 10,000 rounds! As you can see in the upper right corner of the picture, I have over 9,500 rounds of ammo for this gun. This weapon is very similar to the AK-47 in real life. I’ve used it a lot to take out some people in free mode as well. I definitely suggest buying this weapon when it becomes available to you. 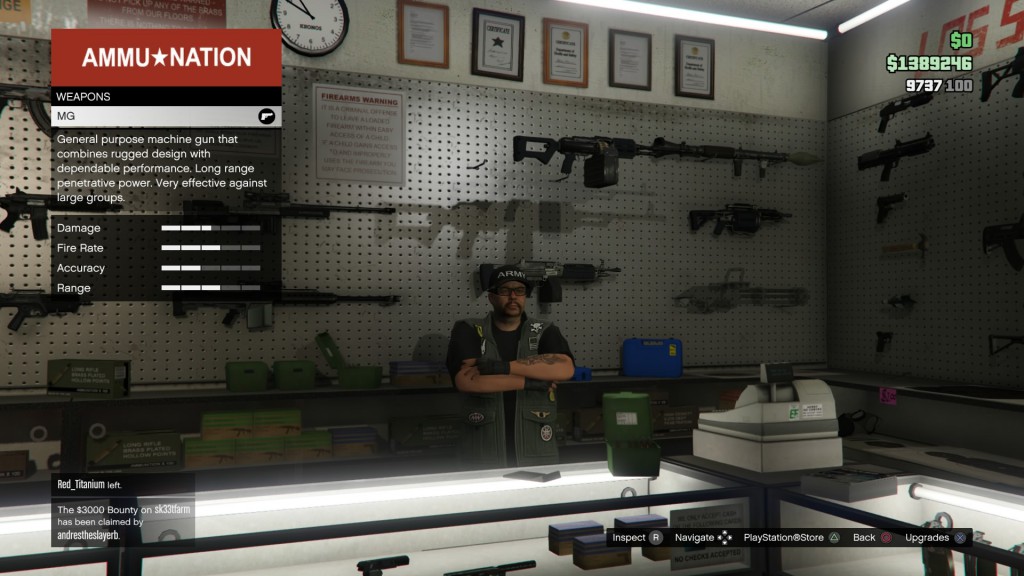 The MG available at Ammu-Nation

As you can see from the description of the weapon in the picture above, it is a machine gun and is pretty good at a taking out a lot of enemies. The weapon however, is a little bit heavy and you won’t be able to move very fast with this. I suggest using this when there are a lot of enemies in front of you to try and take them out fast when in the survival challenges. It does take a few seconds to reload this powerful weapon thus leaving you a little vulnerable so I suggest switching out rounds when very little enemies are around or you have good cover. It is also good at shooting at vehicles and disabling them as well because you will encounter some of those in survival. I honestly would use this in the last rounds of survival for the more difficult wave of enemies you face. It does have fairly good range so you can hit targets from a nice distance. This weapon becomes available for purchase once you reach rank 50. Otherwise, you might see it lying on the ground in survival and can pick it up and use it. 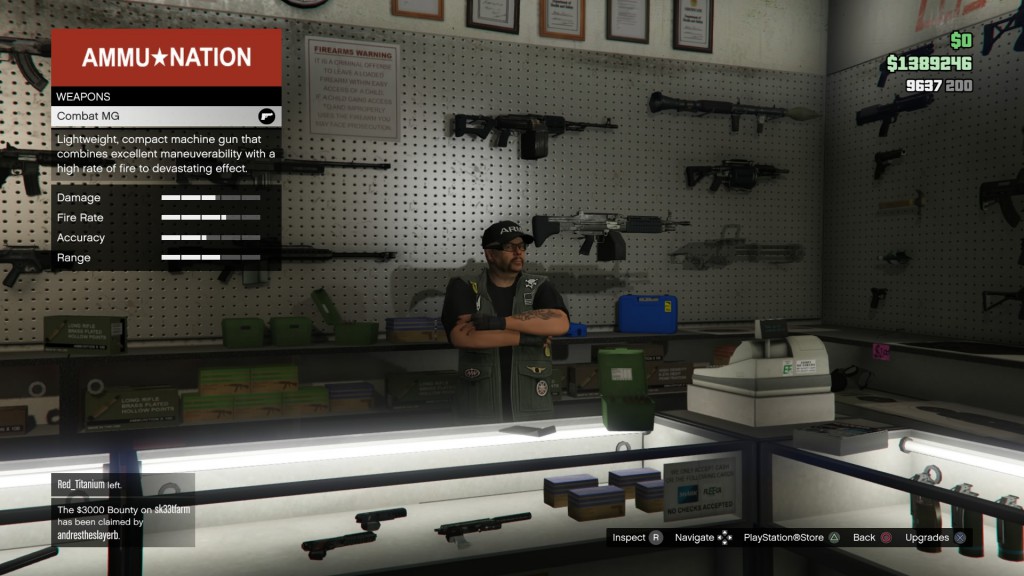 The Combat MG at Ammu-Nation

The Combat MG is probably my most favorite gun to use in online multiplayer. It is much lighter than the MG thus allowing you to move around faster and is very good at taking out enemies quickly with a very high rate of fire. It also holds nearly 10,000 rounds and if you are able to buy the extended clip, one magazine holds 200 rounds allowing you to take out a lot of enemies before you have to reload! The combat mg is capable of taking out armor quickly allowing you to take the enemy or player out much faster compared to other guns. At times when I am playing survival, I use the combat mg from waves 7 through 10 as it helps to take out the more powerful enemies quickly and if your aim is good, quickly getting headshots as well.

One thing to mention about survival is that during some of the middle waves and the final wave of enemies, the enemy sends in helicopters usually with two people sitting on both open sides of the chopper with heavy weapons trying to take you and your teammates out. Sometimes those enemies in the helicopters are tough to take out, but the Combat MG is very helpful in taking down those helicopters, again, with its high rate of fire. There are many times I was able to take out the pilot of those helicopters thus saving me from having to use other weapons better suited to take out helicopters such as an rpg or homing missiles which I will get into next. 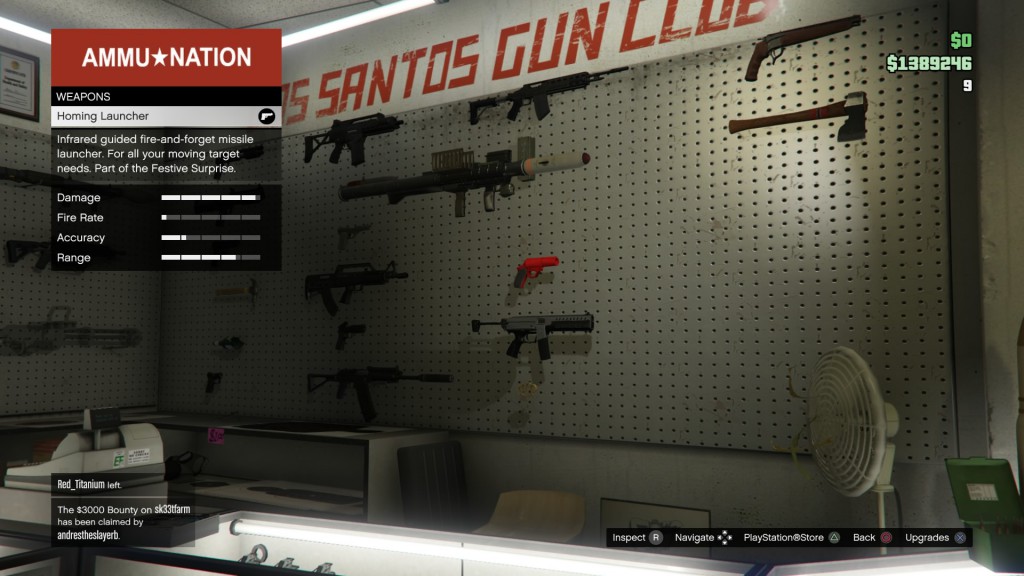 This is a weapon more suited to take out a very large group of enemies concentrated in one area at once, or take out vehicles and aircraft that might be used. I tend to like this weapon better than the standard RPG because once you lock onto a target, especially a moving target, it hones in on the target and generally takes it out, unless it is able to move out of the way very quickly. I use this a lot to take out the helicopters that I encounter in survival or free mode. It is best, however, when trying to take out a helicopter with this weapon in survival mode that you take out the two gunners on both sides of the helicopter first. It does take a few seconds to fully lock onto to the target thus leaving you vulnerable to fire from the gunners of the chopper. This is why I use the assault rifle or combat mg first to take them out which then leaves me free and clear to use the homing launcher to take out the choppers. 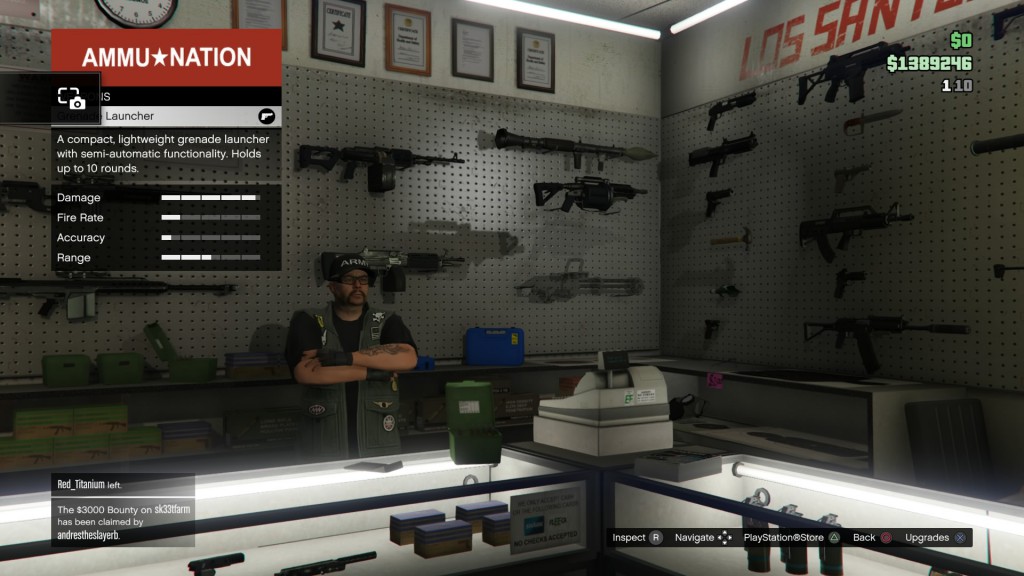 I use this weapon generally in certain situations such as taking out enemies in vehicles or similar to the rpg and homing launcher, large groups of enemies at once. When doing survival (I know I’ve mentioned this a lot), some of the enemies arrive in vehicles and what better way to take them out in one large explosion than using the grenade launcher. I love it when a group of enemies parks near abandoned or unoccupied vehicles because then I launch a grenade from this weapon and HUGE explosions result thus killing the enemies in the vehicles and any other enemies that might be nearby. Very good to use to get yourself out of a bind especially in free mode if you have a bounty on you and there are a number of players trying to take you out to get that money. 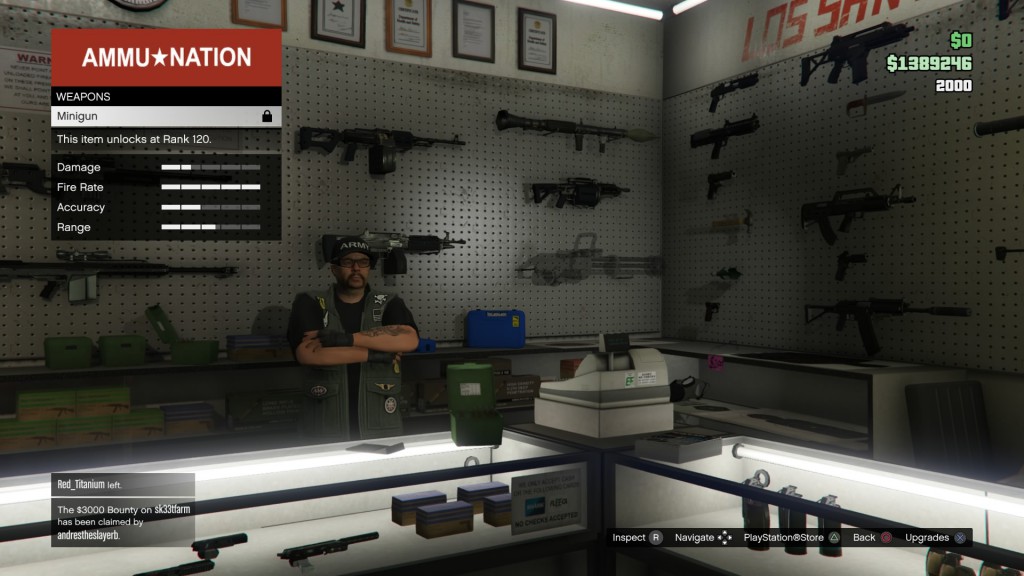 The Minigun which is not available for me yet.

There are a lot of other weapons available that I have not mentioned, but are available to be used in multiplayer. One of the last weapons I have not unlocked yet is the minigun. I have used it before though and it has an EXTREMELY high rate of fire and can be used to take out enemies probably faster than any other gun in the game. The only drawback to it though is that it is a very heavy weapon to use and your character moves slowly when using this. I’ve seen it used a lot by other players to take out helicopters if they don’t want to use homing launchers or rpgs. Trust me the mingun can take out helicopters very quickly and you better believe I will buy this as soon as it becomes available. This weapons unlocks once you reach 120.

Some other weapons a lot of people like to use especially in free mode is the sniper rifle, regular grenades, sticky bombs, mines, Molotov cocktails, shotguns and more. I do have sticky bombs and grenades and those do come in handy as well especially if you know spawn points of enemies in survival challenges.