I’ve talked a lot about GTA 5 recently from my experience with the Progen Itali, to using the other super car I own, the Zentorno. There’s just so much stuff to do in Grand Theft Auto 5 and Rockstar continues to pump out more content.

Just take a look at the most recent update. One of the things I haven’t talked about much are the free challenge games in GTA 5. They are just random free events that will pop up that anyone can participate in or choose not to.

I have participated in a few of them and I want to take a closer look at some of those. Some of these free challenge games I’ve successfully won and others are definitely more challenging to do. There’s at least 19 different challenges and I will list them all.

Drive-by Kills – This challenge lasts for 5 minutes and the objective is to do as many drive-bys as you can against other online players. Shooting at random pedestrians does not count. All you need to do is just get into any vehicle and find other players and shoot at them. It can certainly be a tough challenge considering other players will try to do the same thing to you. I have not succeeded at this challenge yet.

Fly Under Bridges – This one lasts for 10 minutes and as the name implies, you fly under as many bridges as you can in the time limit. I haven’t actually tried this challenge, but I’ve watched others participate in it and it can certainly get crazy. One of the nice things about this particular challenge is that planes will spawn as soon as the challenge begins so you don’t have to go to an airport to find something to fly in.

Inverted Flying – This one is challenging, but fun. What you do in this one is to get a plane and fly upside down as close to the ground as you possibly can. I’ve participated in this one a few times and came in second place once. The time limit for this particular challenge is 5 minutes.

Fastest Speed – This one is where you’ll want to be in the fastest car possible (that you own, or maybe steal) and try to get the highest speed possible. I’ve done this one numerous times, but I actually came in first in a recent try of this challenge. I was fortunate enough to be in my super car at the when this challenge started which is the Zentorno. This car has some major acceleration and speed and I was fortunate enough that I was in the fastest car in the lobby I was in at the time. My top speed was 12 mph faster than the second place person. This is one of my most favorite challenges. 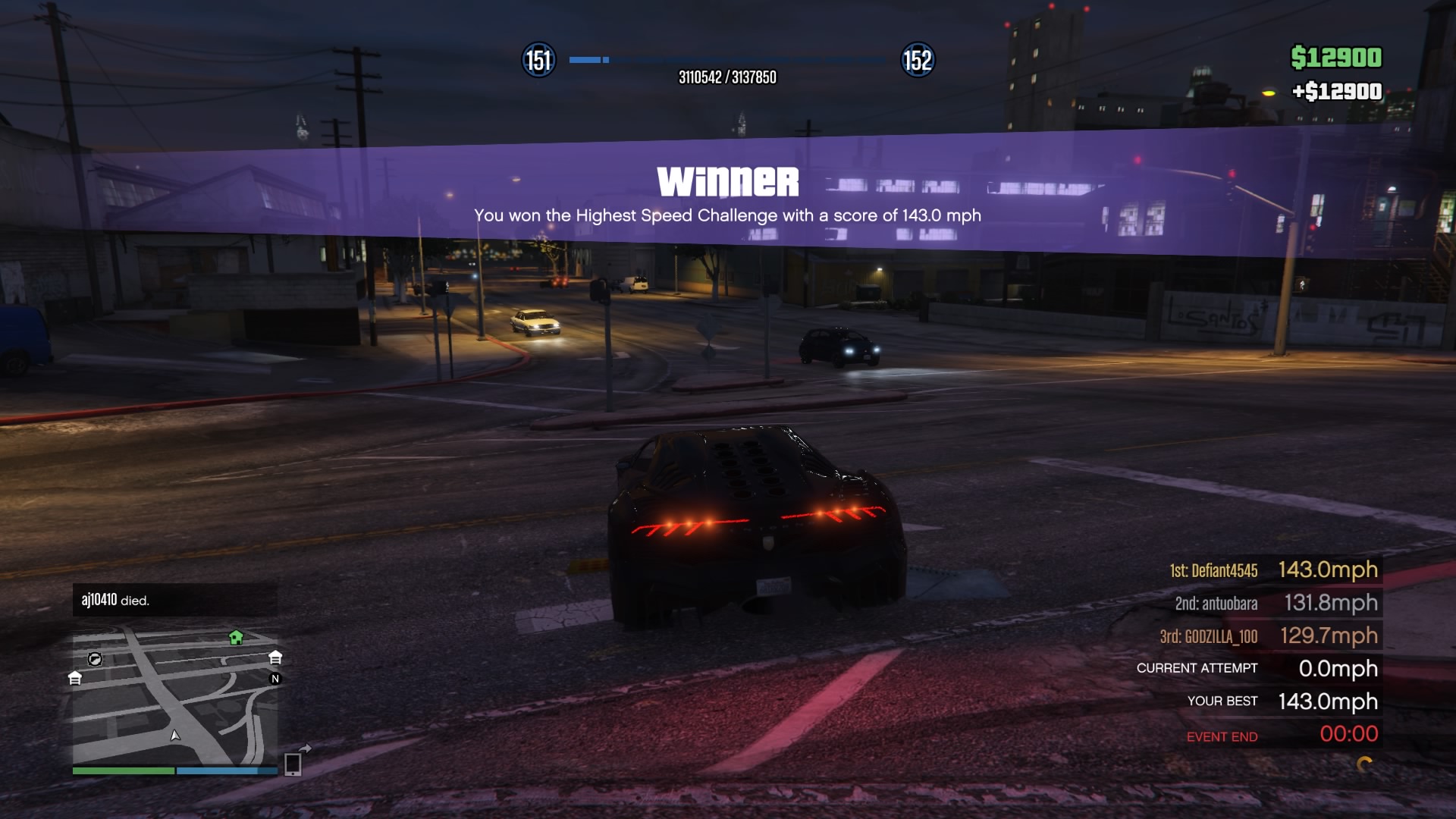 Longest Bail – What you have to do in this challenge is bail out of a moving vehicle and see how far you travel from doing that. I’ve done this one a couple of times and have come in second or third place before. It can sometimes be funny especially if you bail out a vehicle as it goes over a bridge or a cliff.

Longest Free-Fall – I’ve never successfully completed this challenge. The object of this one is to either get in a plane or helicopter and get as high in the sky as you can, then jump out and fall as close as you can to the ground before launching your parachute, but also not falling to your death either. I always forget which button brings out my parachute and end falling to my death. I guess I should practice parachuting a lot more before partaking in this challenge.

Longest Fall – The only difference between this one and the one I mentioned above, is that in this one, you want to fall as far as you can without dying but also not to use a parachute. I only won this one by accident because I was engaging with another player in battle and happened to fall off the side of a mountain. I fell a pretty good ways, but still somehow managed to survive with almost nothing left in my health bar. I’ve never been able to repeat that in this challenge.

Longest Jump – All you do in this one is get in a car or motorcycle and try to find a place you can get a good jump for the longest distance. A lot the stunt jumps during this challenge will definitely help in that cause. I’ve came in second one time from using the motorcycle that I have in my vehicle inventory.

Longest Time in Reverse – This challenge requires you to get in a vehicle and drive in reverse for as long as you possibly can without crashing into anything. I’ve successfully done this challenge a few times and some of the city streets in Los Santos were easier to do than on the freeways at least it was for me.

Longest Stoppie – This one requires a motorcycle and all you do is see how far you can go on a motorcycle doing a stoppie. I haven’t attempted to this challenge as I have not really mastered stoppies in GTA 5.

Longest Wheelie – You take a motorcycle in this challenge and see how far you can go doing a wheelie. I’ve won this one a few times as I’ve been able to take my own motorcycle a pretty good distance in the few times I’ve won it. The challenge only lasts 5 minutes so it is something fun to do in order to kill time.

Flying Low – All you do in this one is fly as low to the ground as you possibly can without touching the ground or crashing into anything. I’ve seen others participate in it, but I haven’t personally done this challenge yet. You don’t have to fly upside down in this one.

Lowest Parachute – Very similar to the Longest Free Fall challenge though I think this one measures the time it took you to open the parachute versus the distance. Just like the other one though, I keep forgetting the button that opens the parachute.

Melee Kills – You’ll want to achieve the highest number of melee kills on other players in the 5 minute time limit. I have never successfully done well at this one, but I’ve only tried it 2 times. Other players have more success with this challenge.

Near Miss – What happens here is that you’ll want to get in a vehicle and get as many near misses from the traffic in the game as you can. I’ve done this challenge a lot and found it pretty fun and easy to come in 1st or second place.

Avoid Crashes – This is similar to the near miss challenge as you try to see how long you can go without getting into any crashes. This one I think is fun as I’ve come in first place on it before. Other players will try to run into you though so you’ll want to be careful.

Stolen Vehicles – All you do here is steal the most vehicles in 5 minutes. I recently did this challenge and came in second place. The only thing that can hinder you sometimes is that the pedestrians you throw out of the vehicle will sometimes be pretty angry and try and fight you. I think this is the only reason I didn’t come in first because I had to deal with them.

Well now you know all the different free challenge games in GTA 5. They will just happen at random times and you never which one of the 19 will come up. You are not required to participate in them, but it can be fun sometimes especially if you want to try and earn extra money.