If you remember last time I had done a city comparison of Los Angeles. The city of LA in that game is probably the largest city in land area and it rightfully should be given the sheer size of LA and its surrounding areas in real life.

This time I will be taking a drive up the California coast to take a look at San Francisco and how it compares to this real life California city.

I have yet to venture to this major city or any city in California for that matter. I definitely plan to some day in the future. For now though I will have to settle for visiting the city in video games.

So what makes San Francisco so great? For one it is a lot more compact and not as spread out as Los Angeles is to the south and San Francisco has a lot of world renowned (not to say LA doesn’t) landmarks that are just so recognizable.

Of course when I talk about San Francisco, I cannot talk about the city with out talking about one of the most recognizable bridges in the world which is of course the Golden Gate Bridge. One thing I will have to say about this city as well is that it is one of the most used cities in video games.

How does the Golden Gate Bridge in The Crew compare to the actual one? It does so remarkably well. It may be a tad bit shorter in the game, but the overall look of it is well done. The orange color is done with great detail as is the width of the bridge.

What about that other bridge? The San Francisco-Oakland Bay Bridge is in the game, however this version is not quite the exact replica of the actual bridge though I will say it’s an honest attempt.

If you look at the photo below of the real bridge, you’ll see that there are at least 3 bridge towers on the bay bridge. 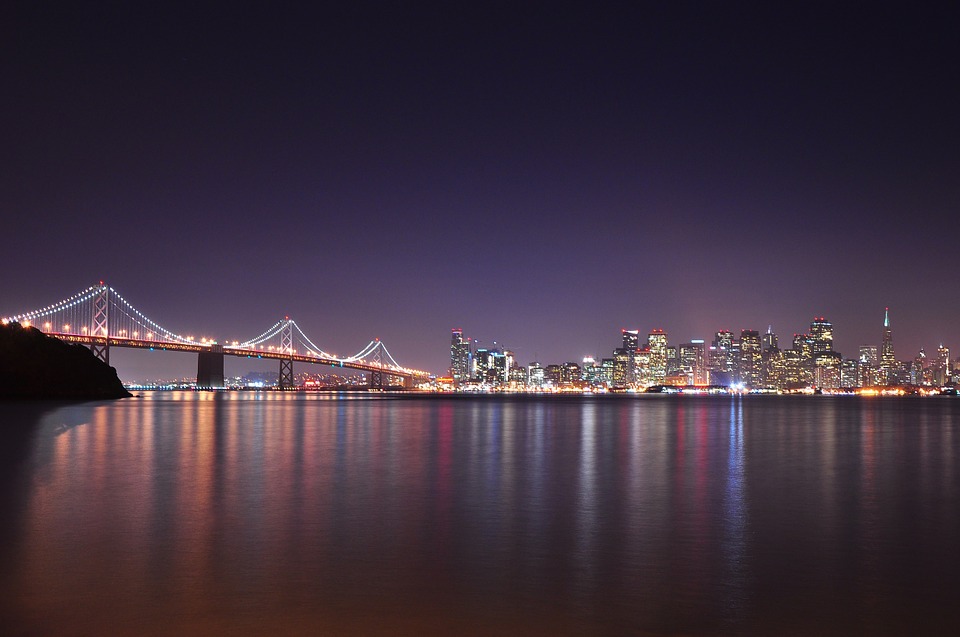 The next one is an in game picture of the Bay Bridge and as you can see even though it doesn’t give a full view of the bridge, there is just one tower. Not entirely sure why the developers kind of skimped of this bridge a bit, but I’m still glad it is in this game.

San Francisco is not a city with a lot of highways, but the ones it does have are surprisingly not in The Crew’s version of the city. The Bay Bridge in real life is part of interstate 80 that ends or begins in San Francisco depending on which direction you’re coming from. The only other freeways in the city are I-280 and parts of US-101.

There were originally supposed to be more freeways especially on the city’s waterfront, but there was such great opposition to them that they were all scrapped.

Moving away from the highways and bridges, what about the city itself? Well I can definitely say that the skyline in The Crew’s version of San Francisco does closely resemble the main parts of the real skyline. There definitely are some skyscrapers missing especially the newer ones that now make up the city’s skyline, but as I said the main ones or what has made the skyline iconic over the years are there.

San Francisco’s tallest skyscraper, the Transamerica Pyramid is there and closely resembles the real one. It is definitely an iconic building as it resembles a very skinny version of a pyramid. There is a skyscraper currently under construction that will replace this iconic skyscraper as the city’s largest. It will also be the second tallest building on the west coast.

Next up is the building known as 555 California Street or what was formerly known as the Bank of America tower. It’s a very tall tower and a wide one at that. You’ll definitely notice the building in the game as you’re coming into San Francisco.

There are other tall buildings in the skyline, some resembling a few other skyscrapers in the actual city and some that seem to be placed there to fill in the skyline or make it look more authentic. Overall though you can definitely tell that it is the San Francisco skyline.

There are some other recognizable parts of the city in the game that include San Francisco’s Ferry Building, the city’s famous hills and slopes, and some of its famous neighborhoods as well.

I now have to mention this because I’ve talked about the Bay Bridge. Now the full name of the bridge (which I’ve already mentioned) is the San Francisco-Oakland Bay Bridge. Notice Oakland is a part of the full title of the bridge. It is the other city across the bay, but is it in the game?

The answer to that is a resounding no. It does surprise me a little bit that the game developers did not at least include some form of Oakland in the game. Instead what’s there when you cross over the bridge is nothing but a port. The upcoming open world game, Watch Dogs 2 will have a full version of San Francisco, Oakland and even parts of San Jose itself (more famously known as Silicon Valley).

That ends my comparison of the real city of San Francisco versus The Crew’s version of this famous California city. It seems the focus was just mainly on the very core parts of San Francisco and nothing else which is fine because it still works.

Now I only have one more city left to compare to the real thing and that will wrap up my city comparison articles. I certainly will post new things from The Crew such as hidden cities, landmarks, and more so definitely stay tuned.

If you haven’t bought The Crew, read my review and buy it now! A major expansion to the game is coming out in a few months that you won’t want to miss out on and now that it is selling for $29.99 at GameStop, it is a great time to buy the game and explore the cities and the huge game map yourself.

In the mean time check out the video below of my drive through San Francisco and as always, post your thoughts on the game.

2 thoughts on “The Crew’s San Francisco”