It has been awhile since I’ve last done a comparison between a city from The Crew and its real life counterpart. The last major city I had done was New York City and that completed cities from the Midwest, south, and east coast. All that is left now is cities out west.

I will drive all the way from New York to Utah driving through the beautiful mountains in the game. From there I will drive into Salt Lake City and see how the game’s version compares to the real Salt Lake City.

I have never been to Utah, much less its capital of Salt Lake City. In fact I’ve never been further west than Colorado and I’ve been to Colorado only twice in my life thus far, both times happening in the last decade for camping trips.

I definitely want to make it back to Colorado as soon as I can sometime and want to do more exploration of the Rocky Mountains and the city of Denver. I also want to go much further west and explore Utah as I know there are some beautiful areas there as well.

Since I also like to explore cities, you can definitely bet that Salt Lake City is one I want to explore as well. It is interesting that the developers chose to use Salt Lake City in The Crew instead of some more prominent cities such as Denver and Phoenix. Heck you could probably throw an overlooked city such as Albuquerque in there too. 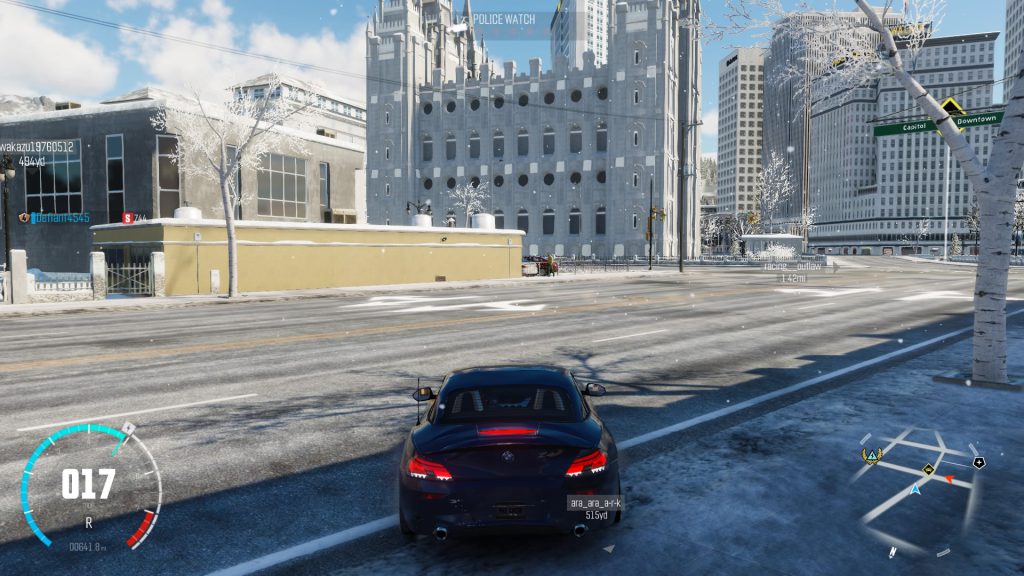 Nevertheless though it is cool to see a city hardly ever featured in games and other media, in this particular game. I have mentioned this before though in my past city comparisons that the Salt Lake City in this game as well as the rest of the cities are not to scale of the real life cities.

For one thing in The Crew, you can drive on an interstate highway to get to Salt Lake City, but then it ends at or just slightly bypasses the city. There are no actual freeways in the city unlike the real life version. The real Salt Lake has the interstates of I-15 and I-80 going through as well as sort a small interstate loop known as I-215.

Another interesting thing about the highway that takes you into Utah and ultimately to Salt Lake is that it is labeled or signed as I-70 in the game. Now I-70 in real life does go into Utah from Colorado, however it actually ends at I-15 a good ways south of Salt Lake City. For a long time I always thought that I-70 took you right into SLC.

Let’s get to the main part of the actual city now. Salt Lake does have some high-rises/skyscrapers and it is also known as being the center of the Mormon faith with very large and elegant churches. Since the city is also the capital of the state of Utah, you will also find the state capitol building there as well.

The game definitely does get the feel and look of Salt Lake City right. The skyscrapers do fairly resemble the actual skyline of the city in real life and some of the churches actually resemble their real life counterparts as well.

There is only one professional sports team in the city and that is the NBA Jazz. There is a building in the game that sort of resembles the arena they play in, but it looks a little too small and not really sure if that was done purposely or not.

Salt Lake does have a decent size airport in real life, but it is not present in the game given the scale of the city. There really isn’t much else to compare here as you can really see what the downtown is like, the capitol building and the churches and then a few areas outside of the central area and that’s it.

One thing I like is that since the city is nestled up in the mountains, the city in the game does have the feel of that as you can see the snow capped mountains in the distance that you can drive too and there is also some snow across the city scape. Fortunately there isn’t any on the roads you’re driving on in the city.

Well there you have it folks, a little comparison between the real Utah and its capital city of Salt Lake City and the game’s version of Salt Lake.

There’s not too many more cities left to compare, but I will have more coming. I still have the cities of Las Vegas, San Francisco, Los Angeles, and Seattle to drive to in the game and make some great comparisons to their real life counterparts.

After that I will probably talk about some of the hidden cities that are in the game. There are a few of them that the developer put in there and not made mention of probably because they really want you to drive and explore the very large game map.

I can definitely tell you these hidden cities are not anywhere to being close to even half the scale of their real life counterparts and aren’t even as big as the main major cities in the game. You could even go as far as to say that they could be similar to those little tiny towns you might drive through. One or two blinks and you’ve passed through it!

As always check back for the next city comparison article and post your thoughts and comments. Also check out my video below of my drive to Salt Lake and around the city as I get a good look at some of the architecture regarding the buildings and churches the city is known for. You’ll also see my beautiful drive towards the city as the awesome I-70 highway through the mountains is elevated and has some breathtaking views. It makes me want to drive there really bad! Hope you enjoy the video! Don’t forget to read my full review of The Crew if you haven’t already.

2 thoughts on “The Crew’s Utah”